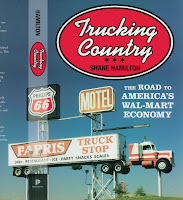 In an article posted to the History News Network, University of Georgia history prof Shane Hamilton looks at last month’s presidential election through the lens of themes hit upon in his new book about the 20th century coalition of independent truckers and agribusiness that contributed largely to the deregulatory political climate of the 1970s and ’80s. That book, Trucking Country: The Road to America’s Wal-Mart Economy, out now from Princeton University Press, traces the origin of our low-price, low-wage consumer economy to the alliance of owner-operators and agribusiness after the Great Depression.

In the HHN story, Hamilton echoes our notes here in his title — “>Joe the Trucker and ‘Real’ America’s Pocketbook Politics” — in which he notes, “In October 2008, Joe Wurzelbacher became America’s best-known employee of a plumbing company when he questioned Barack Obama on his tax policies, suggesting the Democrat intended to stifle the American Dream for small business owners. But back in April 2008, hundreds of independent (that is, nonunion, self-employed) truck drivers staged protests around the country, demanding that federal policymakers do something about skyrocketing diesel prices that were nearing $4 per gallon.”

pIt’s these sorts of pocketbook politics, with what Hamilton calls an ‘anarchic neopopulist’ edge, that led the independent food haulers and other independent truckers, after the 1960s and powered in part by none other than Overdrive founder Mike Parkhurst’s own brand of such, to be such hefty contributors to the eventual deregulatory political climate. Parkhurst sold Overdrive in the mid-1980s, but not before, as he himself put it and as Hamilton quotes him, dealing a decisive blow to the “giant rip-off of [consumers’] pocketbooks and their dinner plates” that he saw as the government’s price- and entry-control role in regulated trucking. /ppAn item on Hamilton’s book also appears in the December print edition of Overdrive. If you haven’t seen it yet, follow this link to check it out. /p