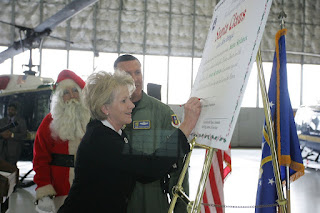 The U.S. Department of Transportation reported Thursday on Transport Secretary Mary Peters’ announcement that U.S. military airspace lanes will be open to St. Nick this Christmas Eve. “We know Santa Claus must adhere to a really tight schedule to get to every house on his list,” said Secretary Peters as she presented Santa his Christmas Eve flight certificate at Andrews Air Force Base (Peters is pictured signing the certificate). “Allowing him to use military airspace will ensure that crowded skies won’t mean empty stockings on Christmas morning. It just wouldn’t do to have the gridlock Grinch stealing Christmas.”

divdiv
President Bush recently announced that the same air lanes would be open to civilian flights over the holiday season to ease congestion.
A perhaps better way to get gifts to their delivery locations on time would be some DOT emergency assistance for Wisconsin small fleet operator Jerry Kissinger, who was digging out of 10 inches of snow when we talked Friday morning. He was preparing to make a charity delivery of gifts for children in his 1991 Mack Superliner to a delivery point north of home base over the weekend. Kissinger’s active in the Make-a-Wish Foundation and other charity organizations. (Photo by U.S. DOT/James Kim Photography)
Top Stories