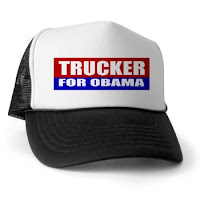 It’s official, folks. Though most truck drivers, according to our eTrucker.com polls taken just prior to the election, didn’t expect to vote for Barack Obama, he’s taken the reins of the government. However, if like that of many of your fellow citizens your mood is upbeat a day after the inauguration, we thought you might get a kick out of this hat, which originated during the campaign, available at the tem/dont-blame-me-i-voted-for-mccain-bumper-sticker-s/306984975″>anti-Obama stuff left, too.)

Or just press on down the road, as most of us will do. Like both an independent owner-operator and company driver for a large company told me yesterday — the freight situation is tough, but, hey, “>we’re all in this together now.”
Top Stories