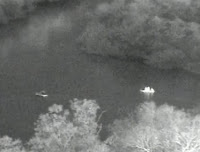 South Texas-based truck driver Robert Fahrenkamp made an appearance on National Public Radio’s All Things Considered news program yesterday in a piece about Blueservo.net, the Texas Border Sheriff’s Coalition’s effort to ramp up illegal immigration enforcement along the border by enlisting citizens. Fahrenkamp, a regular watcher of the Blueservo.net webcams (a still from one is pictured), set up at various points on the Rio Grande, told reporter John Burnett, “>This gives me a little edge feeling…like I’m doing something for law enforcement as well as for our own country.”

As drug-fueled violence continues escalating south of the border, worries over the southern border have grown apace. Watching the border cams for illegal crossers might well be the perfect activity for folks well-accustomed to long hours on the road. Interestingly, reporter Burnett nearly exactly echoed J.B. Hunt driver John Coster-Mullen‘s description of the “>hardest job he’s ever had” (“It’s hours and hours of mind-numbing boredom punctuated by the occasional moment of mind-numbing fright and terror,” he told me in January of his trucking career) when Burnett described monitoring the border cams as “hours of tedium punctuated by minutes of high excitement.”
Since the program began last November, the so-called “>virtual Texas deputies” have, according to Burnett, “yielded four marijuana busts, totaling more than 1,500 pounds, and 30 incidents when illegal crossers were repelled.”
Top Stories