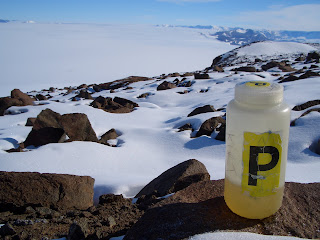 New Zealand postgraduate student in Antarctic geology Kurt Joy took this pic while on location on the frozen continent. It pretty much sums up life for the researchers there, he says: “I spent a month down there working on the glaciers about 300 km south from McMurdo Station. P bottles in Antarctica are a way of life in the field. All urine is collected and shipped back for treatment. Everyone uses them, male or female, and it’s quite an art to their use within a sleeping bag! Scott Base (the New Zealand one) has a specific cleaning facility for the bottles known as the ‘P Lab.'”

In related news, a back-and-forth between letter writers updated in this month’s Truckers News saw South Carolina-based K. Reager objecting to January letter writer Chris Zondlo’s characterization of all who discard bottles of urine or defecate in truckstop parking lots as “dirtbags,” saying Zondlo went too far in his suggestion that anyone who even uses a bottle from time to time is a dirtbag. “I have done this for the 10 years I’ve driven,” Reager wrote. “I keep [the bottles] contained securely until I shower, then dispose of the contents and containers properly.” One wonders, though, where exactly the disposal takes place. Hopefully not, as is somewhat suggested, actually in the shower, eh?