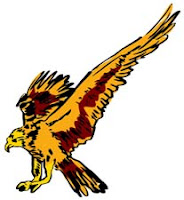 Such was the estimation of Jerry Spires of Spires Trucking in Miramar in South Florida, when he was called on by Associated Press reporter Scott Sonner to comment on a Golden Eagle that crashed through the windshield of one of his trucks. Piloted by Matthew Roberto Gonzalez of Opa Locka, Fla., the rig was rolling down I-80 in Nevada, “>about 60 miles west of the Utah line,” wrote Sonner, when Daryl Young, Gonzalez’ codriver asleep in the bunk, “heard a loud thump like a brick or something coming through the glass,” Young told Sonner. “I woke up, and the windshield was all over me. Next thing I know there was a big bird lying on the floor.”

The eagle survived, and AP photos of rescuers (and at least one of the truck) are available
Of the aftermath, here’s a tidbit from the AP story:
“>’The guys in the truck immediately bailed out because it was one ticked off bird. She was pretty feisty,’ [Nevada Department of Wildlife Spokesman Joe] Doucette said. ‘Even the officer who responded didn’t want to go in there so we had one of our wildlife biologists do it.’
“>The eagle was recovering at the Northeast Nevada Wildlife Rehabilitation Center in Spring Creek, and Doucette said the goal was to release it back into the wild.”
href=”http://digg.com/submit”>Digg
href=”http://www.facebook.com/share.php”>facebook
Top Stories