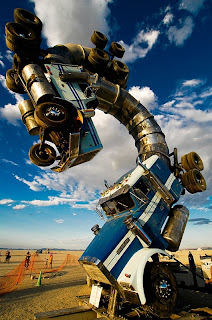 British auto insurance portal Quotezone.co.uk hosts a list of the “10 Wackiest Trucks in the World,” which include this “Big Rig Jig” sculpture by New York artist Mike Ross, built from two repurposed tractors and tankers and displayed at the 2007 Burning Man Festival in Nevada. Also included in the list, notably, are a shot from Japan’s equivalent to a Pride amp; Polish truck beauty show, a shot of infamous Transformer Optimus Prime (of course) and one of the wildly decorated old Pakistani/Indian conventionals so much has been written about over the years. We’re a little unclear on the reasoning behind Quotezone’s inclusion of the list on their website, though the text with each pic is peppered with insurance jokes — such as this one about the Ross sculpture: “>You would need to be sure your life insurance policy covers driving it, otherwise you should steer well clear.”

Comic relief, I suppose, though little about insurance seems funny this April Fool’s morning, as I left for work to find my auto’s rear end smashed sometime during the night. No Fool’s Day joke, unfortunately: turns out the offender was dodging a coyote in downtown Birmingham, Ala., she said, taking out two other cars in the process. If only she’d had the benefit of years of truck driving. Any experienced hauler knows that, with an animal in the roadway, the safest choice for all humans involved is just to stay in your lane and hope for the best. Eh? Nice to know the coyote escaped unharmed, in any case.
href=”http://digg.com/submit”>Digg
href=”http://www.facebook.com/share.php”>facebook
Top Stories