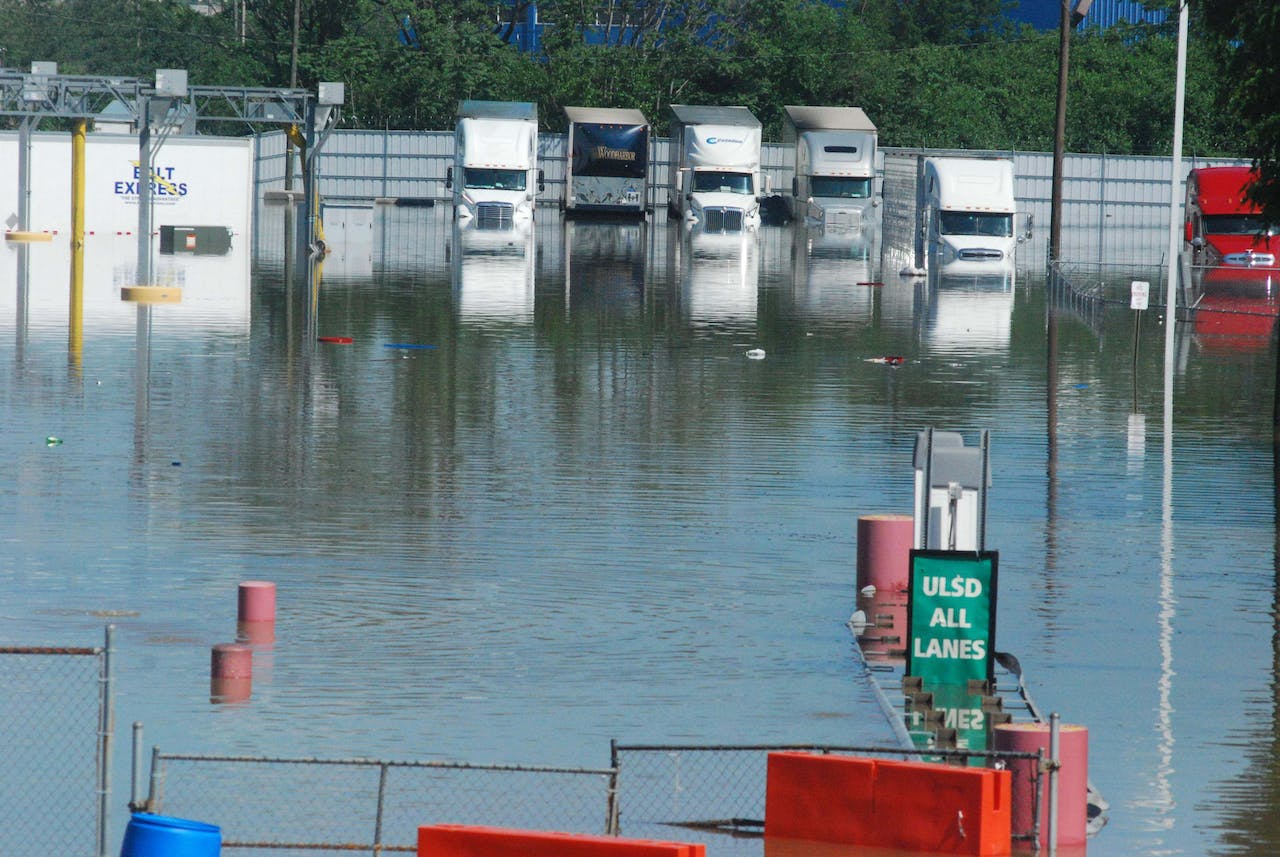 I spent a large part of the afternoon Sunday shop-vaccing close to 40 gal. worth of water from the basement of my East Nashville home, unplugging overwhelmed gutters and generally through it all trying to stay dry. I got off pretty easy. At least some of the many stranded over-the-road drivers around here today are able to make the most of their situations, to hear Truckers News “Marathon Trucker” columnist/blogger Jeff Clark tell of his nearly daylong layover on the shoulder of 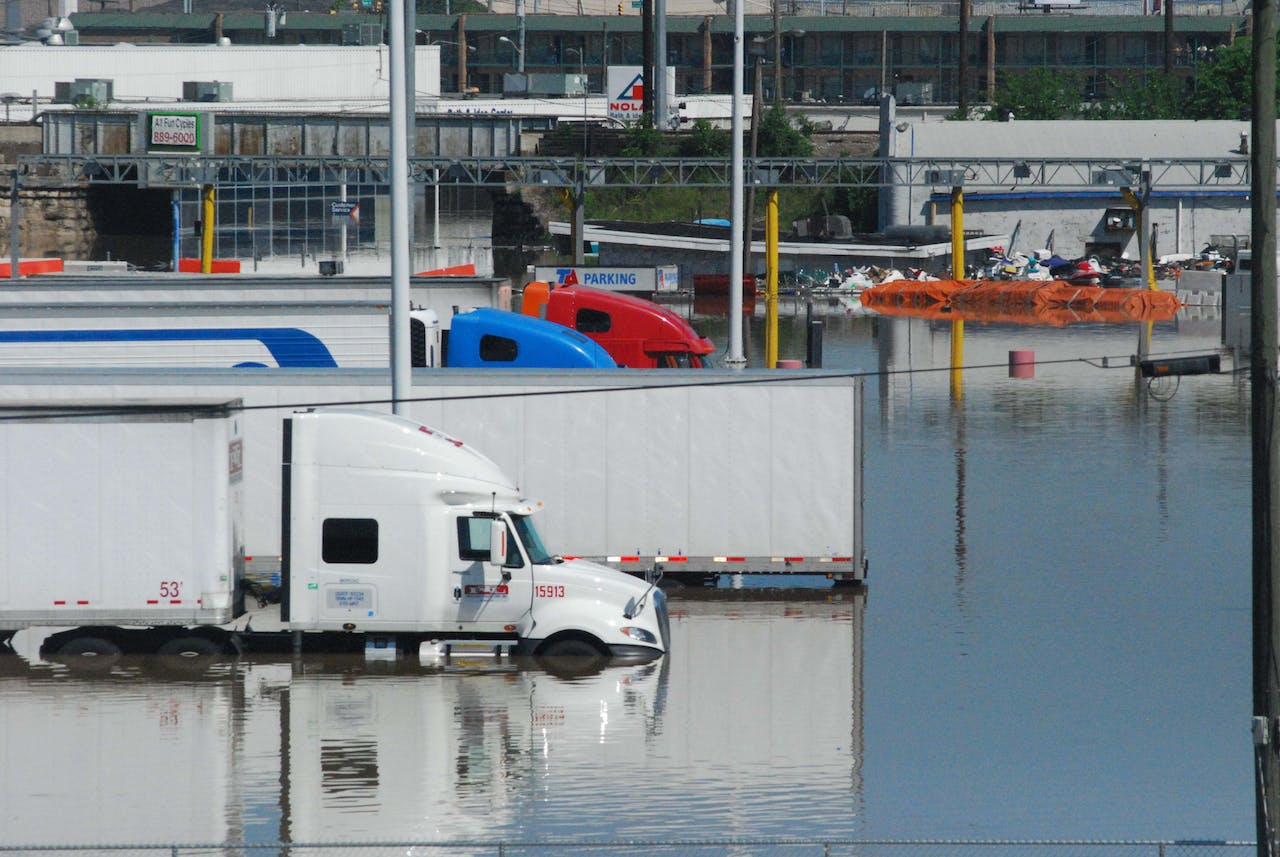 I-40 just west of Nashville and east of the flooded Harpeth River.

For some, reality was not so great. Just see here what happened at the downtown Nashville TravelCenters of America location in these pictures. I rode my bike the couple miles there from where I live and the scene was just awe-inspiring, truly. The diesel fumes above the scene — mostly from reported leaks at the Marathon diesel terminals adjacent to the TA, and which I 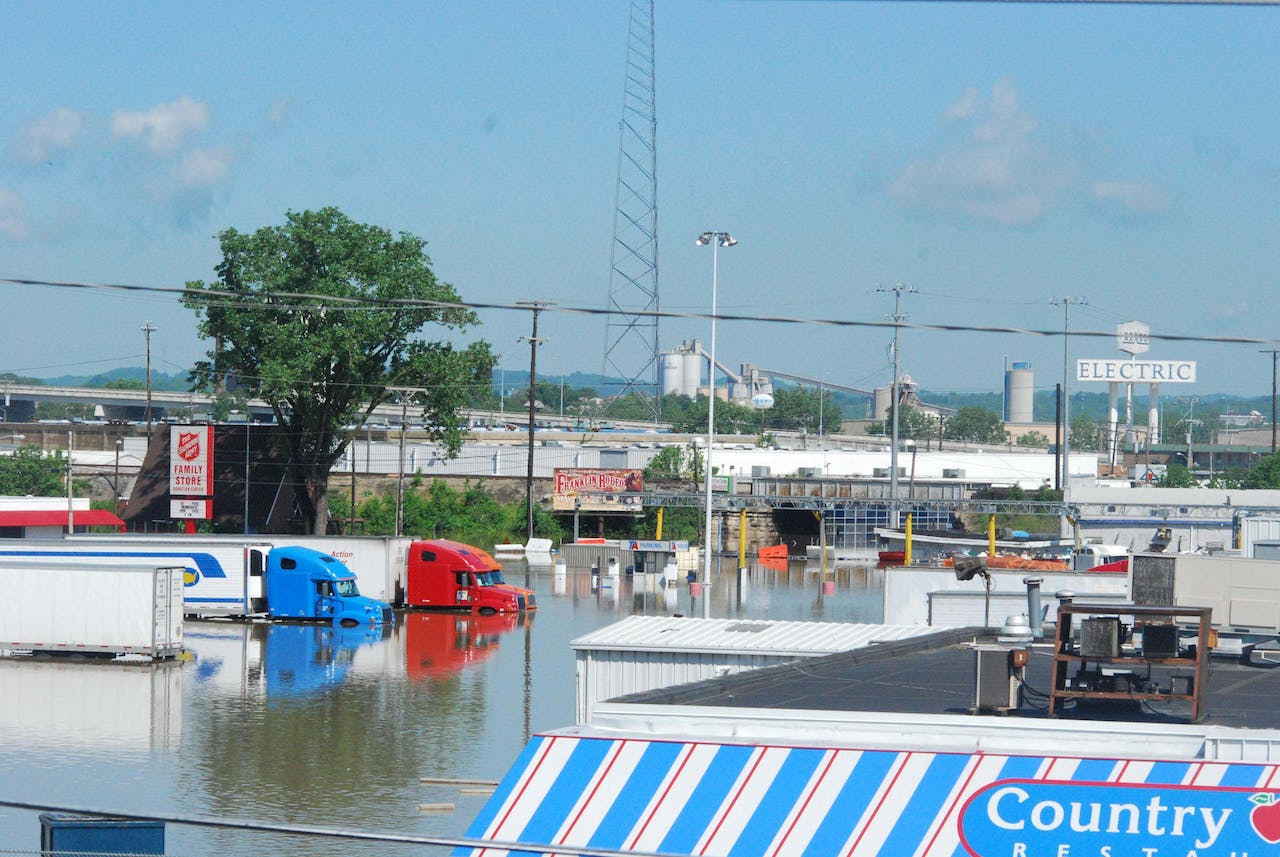 reported on in part in this March Truckers News story, incidentally — from the James Robertson Parway bridge above the TA and the river were so overpowering at a certain point I felt it prudent for health reasons to turn back.

Seeing it was also sad, truly. I think of it sort of like seeing your office underwater, that place you enjoy working in occasionally, though most of the time you’re in the truck, or elsewhere. If you’ve seen any of my videos from the past ni 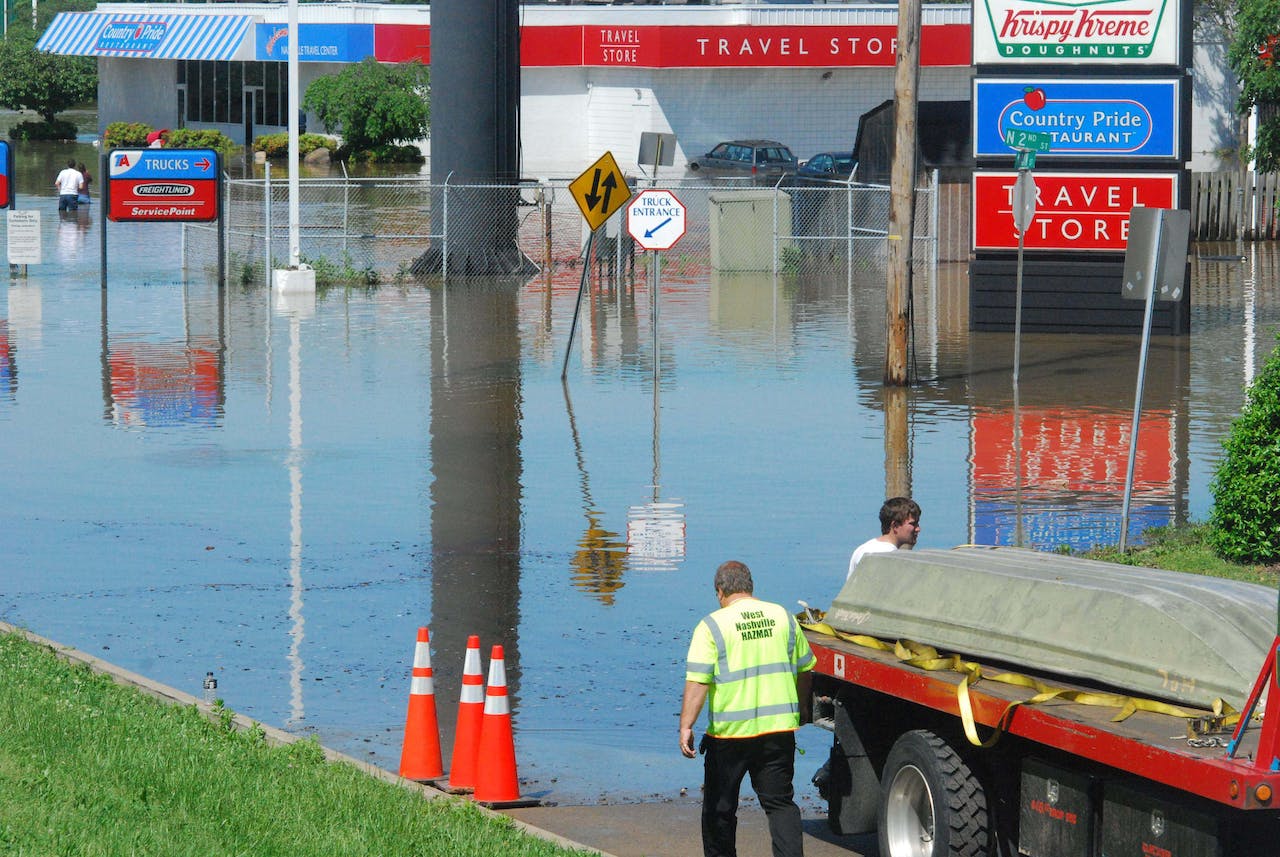 ne months or so, you’ve probably noticed many of the conversations with the various trucking personae featured therein occur to the backdrop of the deluged Country Pride restaurant of the Nashville TA here. Here’s wishing the best to all the courteous kitchen and counter staff and the remainder of the folks there as they clean up.

For more of the rest of how it happened, and the snafus in trying to get some of the stranded drivers whose rigs you see 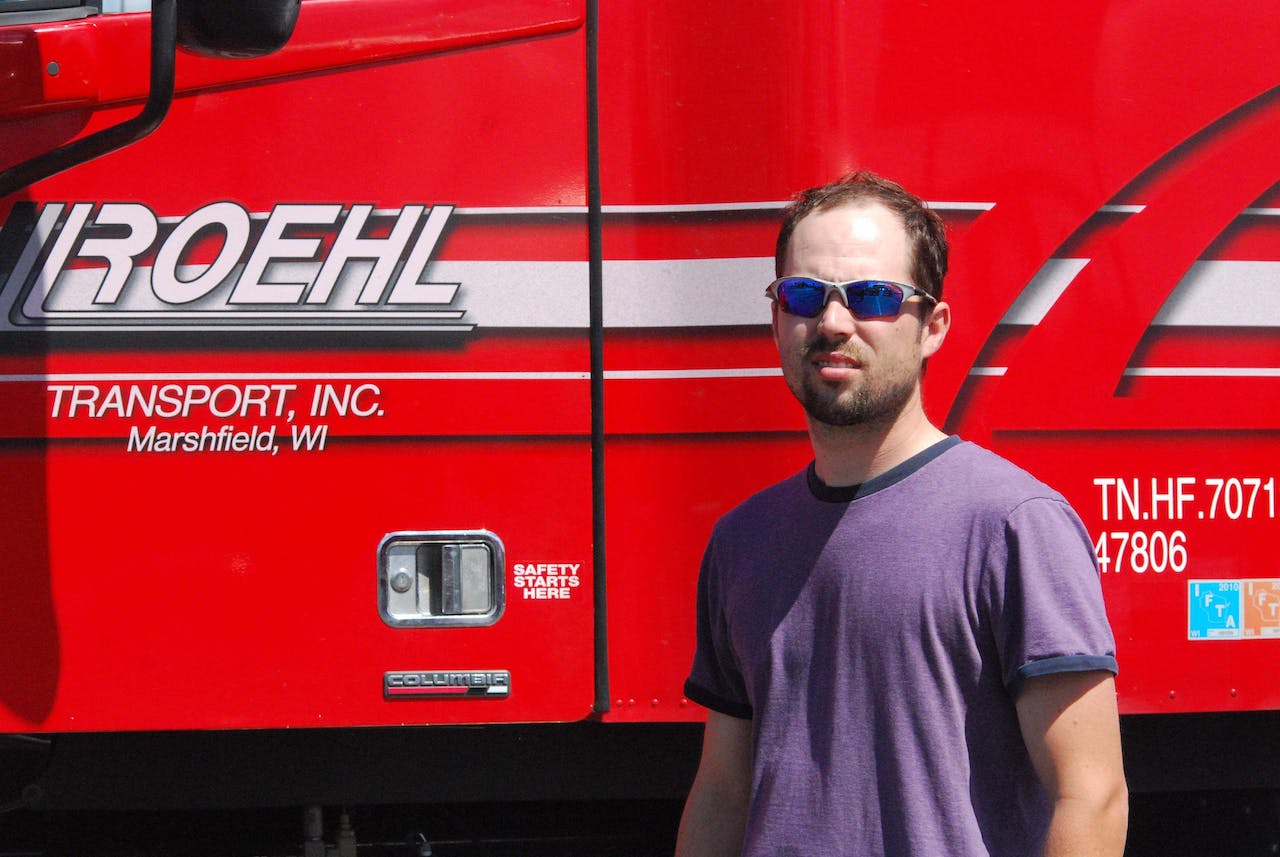 parked in some of these pictures to safety as water levels at certain points last night were reported to have exceeded seven feet, check out the vid below. Interviews there you’ll find with stranded haulers Ryan Lavengood of Roehl Transport (pictured) and James Williams of PAM, and Jon Naff of security company ICS, helping oversee the West Nashville Towing and Recovery hazmat team’s assessment of the situation at TA.

And re: the open question of whether any stranded drivers remained in the flooded trucks you see here, I’m hoping to get better info later on when I return to the scene for a follow-up. Here’s hoping all made it out OK.

UPDATE: I spoke again with security man John Naff of the International Corporate Services firm, who confirmed what he suspected earlier — that no drivers were still in the cabs of the trucks you see in the video above. Good news. As for other news, not so good — in a good seven hours, the river had yet to recede much at all from the levels I witnessed earlier today.

As for the question of available diesel in the area, given the inundation of the tank farms here, which serve a large region of diesel outlets, when I was reporting the March Truckers News story mentioned above, about the cost breakdown of a diesel gallon, different sources referenced similar if not as extreme disruptions to Nashville-area diesel supply that was relatively easily supplemented by product from rack locations in the Louisville area. In any case, let’s hope that logic holds for the region. 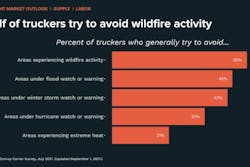 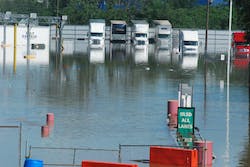 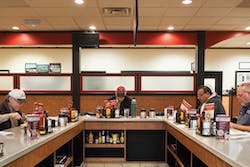 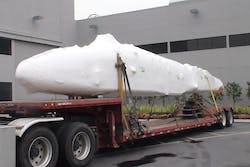