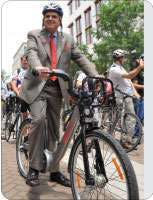 Looky there – DOT Secretary Ray LaHood seems full of employee satisfaction as he pretends to use the SmartBike DC bike rental program, which DOT endorses.

“Latest Survey Shows DOT Employee Satisfaction on the Rise,” reads the headline on a July press release from the U.S. Department of Transportation. Well, gosh, DOT and its ever-expanding domain of regulations have done so much to improve on-the-job satisfaction for truckers that we’re just delighted to know the inspectors and bureaucrats are happier at work than they used to be. Tell us how many of our tax dollars paid for the survey, and we’ll smile even bigger.

Con-way Truckload driver Toby Bogard says he got the idea for his Semi Aware, a book for teens and others about safe driving habits around big rigs, when a woman asked him: Why, if tractor-trailers have 18 wheels, can’t they stop more quickly than automobiles? The query left him at once baffled and inspired. “I realized the full extent of the information that people who drive cars don’t know that I take for granted… And that information needs to be passed on.”

A pot of video gold

It was only a matter of time before a driver produced one of those viral videos that gets people laughing worldwide. Former driver Paul Vasquez’s three-minute “double rainbow” video has had more than 8 million views since he posted it in January. He shot it while viewing a double rainbow so spectacular it knocked him down and prompted a stream of ecstatic expressions and existential questions. What’s funnier to some is the remixed version, with Vasquez’s voice auto-tuned and set to music. Search “double rainbow song” on YouTube.com.

Visit OverdriveOnline.com for a video interview with Bogard.

According to a July story at the Canadian news site Canoe.ca, a trucker from Kitchener, Ontario, was pulled over for driving erratically. The officer, reporter Don Peat wrote, “found a bloody tooth and a string lying next to” the driver, who said he’d originally tied the string from the loose tooth to the roof of his cab. All it took to remove the tooth was “one good bump,” police explained to Peat.

Once upon a time, a trucker began a career as a showman hauling a frozen sperm whale in a reefer around the country. Thanks to owner-operator Ken Harris, more and more people know we’re talking about the late Tyrone Malone, who hotrodded infamous Class 8s with his Bandag Diesel Racing Team before he passed away in 1997. Harris, leased to Landstar Systems, launched www.tyronemalone.net to document Malone’s adventures. Harris caught the Malone bug after answering a newspaper ad in the late 1980s and touring Europe as his driver, “hauling a custom dragster like a rock star… It was such an experience to me that I’ve never gotten over it.” 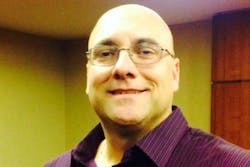 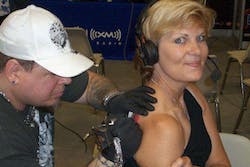 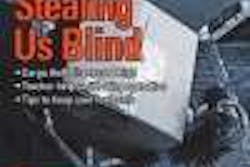 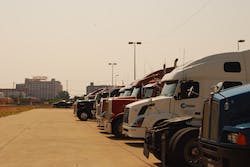 Rolling out to Dallas ‘Too Hot to Trot’ 5K