Remember this rig? Dead Man’s Hand, a custom 2001 Peterbilt 379 built up from salvage, made quite a splash at the 2007 Great American Trucking Show, racking awards in the limited-mileage category at Overdrive‘s Pride & Polish for the team of three who’d built it under the “Outlaw Customs” name, brothers Andy and Alex Gobel among them. The Gobels and company, also involved with their family’s Western Truck Parts business in Henderson, Colo., then went on to build several other award-winning rigs, including the Vigilante entry in the Big-Rig Build-Off competition among custom shops at a subsequent year’s Mid-America Trucking Show.

I caught up with Andy Gobel Friday, Aug. 23, at the Great America Trucking Show, where he’s manning the LKQ Heavy Truck booth — Outlaw Customs was sold in 2011, he says, and Western Truck Parts joined the nationwide LKQ network of salvage yards — big in car parts and, since 2008-09, truck parts. They’ve got a hand lookup tool for truck parts via this link that gives you searchable access to parts at their more than 25 yards around the nation.

From what I can tell, it’s still not on a lot of owner-operators’ radar, but it seems like a great venue for quality replacement parts. In the video below, Gobel tells a little more of his story and talks about the company. 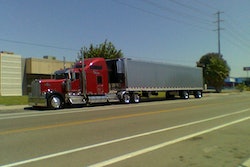 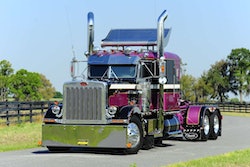 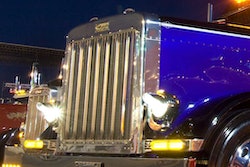 Bright and classy: How to upgrade your headlights, bulbs