The latest U.S. Department of Transportation projection still shows a Sept. 30 release of the final rule that would require the vast majority of interstate carriers to use electronic logging devices. Tom Cuthbertson, Omnitracs vice president, believes that date is reliable, given a prior projection had moved the date farther out, only to be followed by news that the rule had been sent for approvals to the Office of the Secretary of Transportation and the projected schedule locking back in place. On July 30, the rule was sent to the White House Office of Management and Budget for final review before publication.

Cuthbertson emphasizes elements of the proposal that are intended to address the potential for harassment that the Federal Motor Carrier Safety Administration failed to take into account in its prior attempt to institute an ELD mandate. The Owner-Operator Independent Drivers Association’s legal challenges resulted in that rule being vacated.

ELD systems must “allow drivers to do full edits of their logs and create annotations – they can extend drive time but not reduce drive time,” Cuthbertson says. If a carrier makes the edit, it must remain “in a pending state until the driver approves it. Drivers must be able to get direct access to their log information.” They must be able to review it and “reject it if false.”

When a truck is driven for personal use outside the hours rules, meanwhile, the device must be capable of extending the GPS accuracy to 10 miles or greater, in consideration of driver privacy.

Queried about a potential legal challenge to the mandate, OOIDA is waiting to see what’s in the final rule, says spokesperson Norita Taylor.

View basic specs on 13 different electronic logging systems currently compliant under the AOBRD standard in the comparative chart at this link.

The timeline above assumes publication of the final rule for an ELD mandate by Sept. 30, as many observers expect. It would take effect in October, beginning a two-year period before compliance is mandatory. For those running AOBRDs ahead of the rule’s effective date, an extra two years are available to assess options as device and software makers conform their product to the new standard. “We’re getting some people who are moving early,” says Cuthbertson. That includes some owner-operators buying the company’s XRS “bring your own device” system, operable on company-certified Windows Mobile and Android devices. 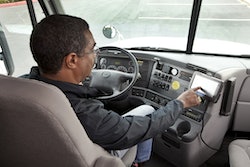