Nussbaum Transportation, having used AOBRDs since 2005, began its ELD transition in May 2018 by forming a steering committee. Management later decided to replace all AOBRD hardware and software in its 430-truck fleet.

The Hudson, Ill.-based truckload carrier switched to Geotab because it offered “a very open interface” that would support its needs in the back office and mobile strategies, says Jeremy Stickling, vice president of safety and human resources. The company chose a platform with a plug-and-play Go device that installs in the vehicle and connects wirelessly to an Android tablet display.

In 2018, Schneider executed an earlier decision to not be dependent on a single vendor for electronic logging and telematics technology. The carrier chose a multivendor tablet-based approach.

“We do a lot more than the hours of service on our tablets,” says Mike Degeneffe, Schneider’s vice president of IT solution delivery. “The tablet is an extension of our back office and a connection to our drivers.”

The AOBRD and ELD software that runs on the tablets comes from Platform Science, of which Schneider is an investor. The mobile applications are segmented into a regulatory suite and a productivity suite. Drivers have become familiar with the tools, so as Schneider transitions to ELD software this year, “it’s not a big slap in the face since they are not going to a whole new system,” Degeneffe says.

Safety director Doug Fry, with a Texas- and Georgia-based 200-truck fleet, recently completed a switch to Blue Tree Systems’ telematics platform for logging and more after learning that many of the legacy dedicated AOBRDs his fleet was running would soon need replacement. “Our old provider had discontinued the product and didn’t tell us,” Fry says. He learned this while ordering additional units.

“We went with a company that we think has the right architecture” to build on. It uses what Fry calls a “brain box” buried in the dash that connects wirelessly to the display screen, which can be BYOD (or “bring your own device”) in nature.

Cam systems also can serve to streamline telematics systems. Jason Palmer, chief operating officer for SmartDrive Systems, says the company’s dual-camera video unit can feed data through a single onboard platform that integrates with third-party ELD and telematics systems such as Geotab’s. Fleets “view data as a competitive advantage, both in how they are able to make drivers’ lives easier with access to data and information, and applications to make the job experience better,” Palmer says.

Changes in pricing and functionality as ELD providers get more sophisticated with telematics service offerings have some carriers looking to consolidate as much data as they can through a single system.

“Price pressure is as high as it’s ever been,” Witty says, representing a potential cost savings for carriers looking to switch. “ELD is a commodity now.” At the same time, Witty predicts that technology companies will no longer be able to survive just by providing ELD software.

At the opposite pole of consolidating telematics is the base version of the Continental VDO RoadLog, a popular option among one-truck independents. It requires no subscription fee and perhaps the only ELD not connected to the Internet, now goes for around $100 less than it did prior to the mandate. Some other services’ monthly fees also have fallen, in some cases significantly.

Yard moves and other challenges
The most high-profile difference between ELDs and AOBRDs is that the former automatically records nondriving activities above 5 mph, including moves such as docking trailers, on the drive line unless a driver specifies them as otherwise.

“Every time the truck moves, you have got to have a name for that move on the drive line,” Stickling says. Nussbaum’s drivers can name an event as an on-duty “yard move” or an off-duty “personal conveyance,” when appropriate, as the wheels start to turn. But failing that, the time will be recorded on the drive line where it cannot be effectively deleted, only reclassified or reassigned. “You can only annotate it,” he says.

That creates work for both the back office and the operators on the front lines. For the InterChange Express 50-truck fleet, the 5-mph speed threshold for ELDs has been the greatest challenge. Drivers have to be trained to record yard moves properly, says InterChange operations manager David Bosserman. “Drivers hear stories from other drivers that they can drive 30 mph without tripping the on-duty status,” he says, which is no longer the case under the ELD specification.

Stickling generally views ELDs’ greater precision in logging activities at customer locations as “a good thing” because its puts pressure on the shipper to avoid interrupting the driver’s off-duty period. Say a driver arrives at a customer location in the evening, planning a 10-hour break prior to an 8 a.m. delivery appointment. When Nussbaum used AOBRDs, the driver might be asked to dock the trailer well before 8.

But under the ELD specification, “if the truck moves at 6 a.m., there is no hiding it,” Stickling says. Nussbaum has trained drivers to explain their hours situation upon arrival at a customer.

“That has helped the driver-abuse side,” he says. “We are seeing less times where a shipper knocks on a driver’s door at 2 a.m. and says ‘move this trailer for me’ when a driver is only six hours into his break.”

For Bosserman and Interchange Express, another challenge is managing carrier personnel and drivers’ confusion over what they’re hearing from law enforcement officers. “It seems that every state is operating on different systems,” Bosserman says. “Some want drivers to email their logs, others want to get in the cab to look at the screen. Some have a secure code they give drivers.”

InterChange Express has printers in the truck for drivers to print out logs, but one officer in Wyoming told a driver that printed logs did not count.

“I think as more people switch over to ELDs, that process will become easier,” he says, with some degree of roadside standardization that just hasn’t been the case with AOBRDs. 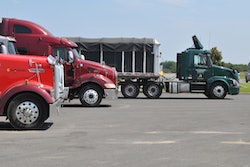 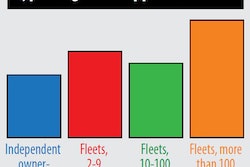 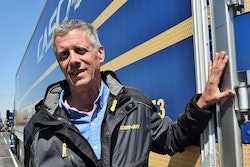 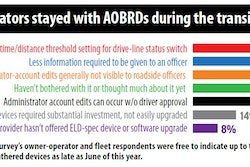