In addition to the federal fuel tax on diesel, each state has its own tax rate. Because owners of Class 8 vehicles have to reconcile the amount of fuel burned in a state with the amount of fuel purchased in that state, the state tax owed could be more or less than the tax paid at the pump. All state accounts are settled once a quarter.

Here are questions I often hear regarding fuel taxes.

How did things change when IFTA came about?

Prior to creation of the International Fuel Tax Association, you had to file an individual fuel tax report in each state where you drove. If you had a shortage in the amount of tax due, you had to pay that state the balance. But if you paid a state too much tax, you may not have always gotten the refund because some states didn’t credit you amounts they owed you. So most owner-operators would try to match fuel burned and fuel purchased.

Now under IFTA rules, you file one fuel tax report with your base state. This report shows all gallons burned and purchased in every state you ran in that quarter. IFTA distributes money to the states you owe and collects from the states that owe you. Afterward, either you have money left in your account or, if you owe money, you have to pay. If you’re leased, that is what you see deducted from your settlement with your carrier.

How is fuel tax calculated?

Could you give me a simple example of that fuel tax calculation?

Since the average owner-operator runs around 125,000 miles per year and the national average for fuel tax is 23cents per gallon, the average trucker spends about $4,800 in fuel tax each year. n

Focus on fuel cost, not tax or pump price

You can’t change the amount of fuel tax you pay. It’s based on the miles you run in a state, even if you don’t buy fuel while crossing it.

But armed with the right information, you can buy fuel where it’s cheapest. The pump price can be misleading because it includes the state fuel tax. Only when you subtract that tax can you determine the true cost of fuel.

In this example based on recent fuel prices and fuel tax rates, the pump price makes fuel appear to be cheaper in Indiana than in Illinois. But because Illinois’ tax is so much higher than Indiana’s, it turns out that fuel in Illinois is actually cheaper.

PRICES AND TAX RATES. Visit eTrucker.com and click on “Fuel prices” to find state tax rates and daily average prices by state, provided by ProMiles. You can also subscribe to an e-mail version at emailmediainfo.com. 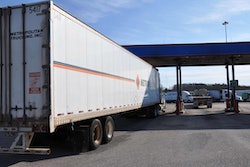