Heller spoke as part of the opening general session at TCA’s 34th annual Safety & Security Division meeting in Charlotte, N.C., and the remarks followed an invocation of the 28,000-plus comments that came in during the last rewrite of the hours-of-service rule. Attendant to that, “countless hours of Congressional interaction” also helped turn the wheels of government toward a more refined hours rule, at least temporarily, with the rollback of the restart late last year.

At once, the party celebrating what many see as a victory for the industry has gone on too long. Moving forward, continued engagement of carriers and drivers would be key to ensuring the federal government gets the hours of service rule and other critical programs right. While the industry, he said, has never had an opportunity to weigh in on the Compliance, Safety, Accountability to the tune of 28,000-plus comments, that opportunity is coming shortly.

The Federal Motor Carrier Safety Administration has the Safety Fitness Determination, which would tie carriers’ safety ratings to the same data that underpins carriers’ CSA scores today, on the regulatory agenda, Heller pointed out. “Who wants to be rated on data that presents an inaccurate picture?”

While CSA by many measures is working to increase the attention to safety among trucking companies large and small, Heller contended, “we as an industry need to do more. We don’t mind being scored. We just want scores to make sense. They need to hear about the problems to the tune of 28,000 comments, but they haven’t.”

The Safety Fitness Determination rulemaking, he added, represented the first, best opportunity to speak out. Range back through a portion of Heller’s talk in the podcast here.

Otherwise, Heller rolled through a list of rules and new legislation on the horizon for the industry, including:
Electronic Logging Devices: The mandate is coming, he noted. The final rule is expected in September, according to the latest updates. Asked for a show of hands among the group showing who was utilizing ELDs today, most conference attendees raised theirs. “When the rule comes out, let’s hope it doesn’t make your [current] ELDs antiques. Is a two-year implementation enough? Should it be longer? Probably, but let’s talk about that – let’s file more than 2,200 comments,” the current number on the proposed rule. “If there’s something you don’t like, file comments on it.”

Hair testing for drugs and alcohol: Heller made note of the Drug Free Commercial Driver Act of 2015, which would “allow for hair testing as an alternative testing method.” More about the bill here.

Drug and alcohol testing clearinghouse: Currently scheduled for Dec. 14 on the regulatory calendar.

Speed limiters: More conversation on this expected rule proposal via this link. 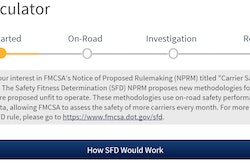