Path to prosperity: Overdrive’s Most Beautiful winner spreads the word of how trucking served as her ticket to the good life 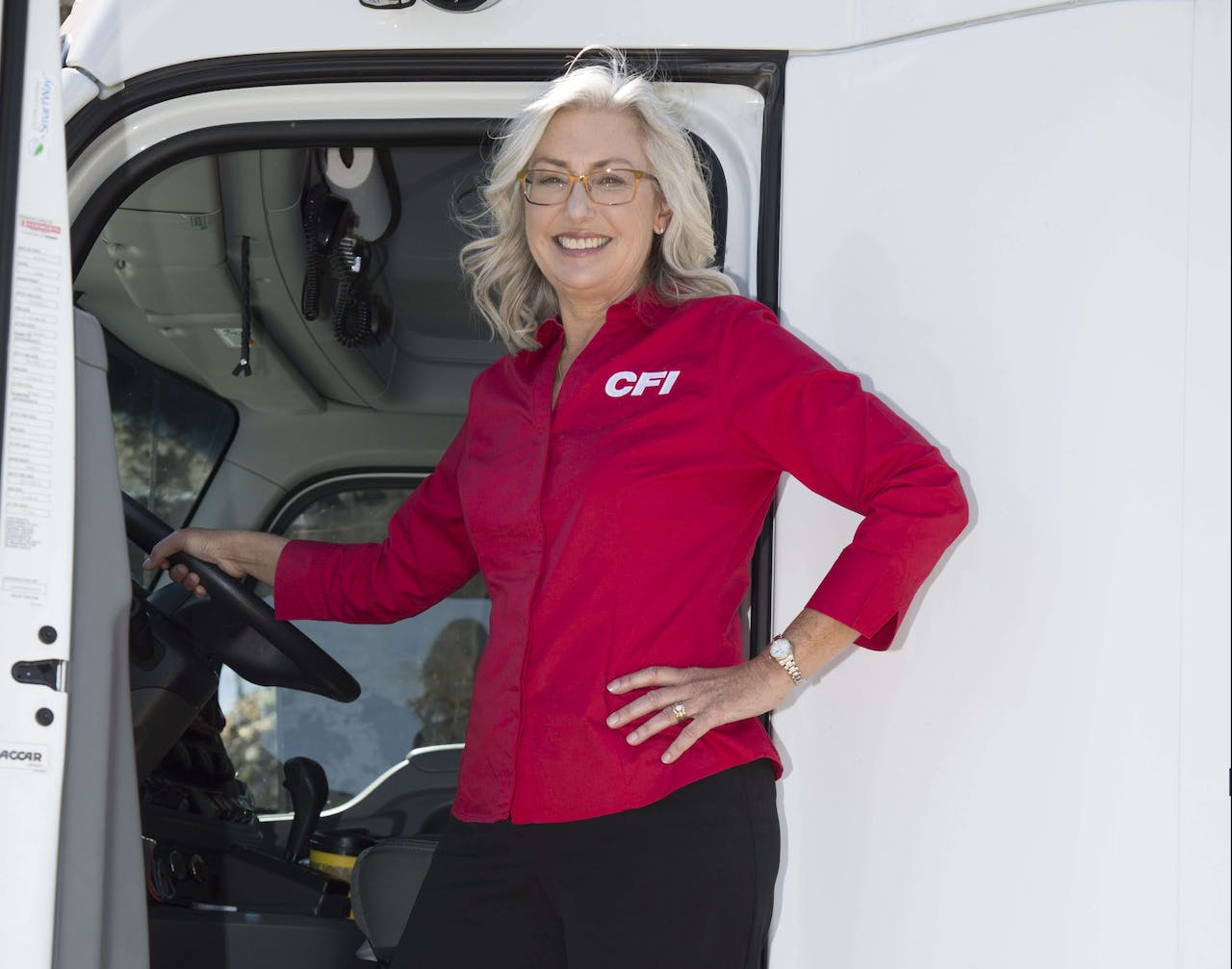 Stephanie Klang credits CFI for not only helping establish her career but also opening doors that have allowed her to promote the trucking industry.

More than a dozen wide-eyed Girl Scouts take turns climbing aboard Stephanie Klang’s Kenworth T680. They are enthralled by its size and the trucker showing them how to pull the air horn.

“She’s pretty,” whispers one of the 6-year-olds gathered around the 2017 Overdrive’s Most Beautiful, a company driver for Joplin, Missouri-based CFI. “And nice,” says her friend, giggling as they try on Klang’s glittery tiara.

Later, after being presented with the Girl Scouts’ Women in Trucking patch, Klang reminded them that girls indeed could grow up and drive trucks.

What she didn’t mention is that when she was their age, she vowed to work her way out of poverty – and how her hard-earned 37-year trucking career played a huge part in that journey.

Klang, 58, shares some of the struggles of her early hardscrabble years when speaking to older girls about trucking as a career option.

“I always felt ashamed by our family’s reliance on welfare and food stamps,” Klang says. She describes the mortification she felt when her single mother got disapproving looks in grocery stores. Or the embarrassment she felt when receiving subsidized lunches at school.

“Usually, there will be a child or two who pulls me aside after my talk and says, with tears, that my story is theirs, too,” she says.

Such encounters reinforce Klang’s passion to give back to the industry she credits with enabling her to earn economic independence, buy a home and travel the country.

“In the early years, I was learning,” she says. “The next stage, I was earning, and now I am returning.”

She’s still driving full time but relishes opportunities to represent CFI and the industry in charity, business and community events.

Her positive attitude stands out in an industry sometimes known for its negativity.

“I’ve learned over the years that a lot of drivers look and act angry,” Klang says. “I tell them, ‘Sweet pea, if you don’t like your life, change it.’ I say it with a laugh, and usually, I can get them to lighten up.”

During a recent CFI monthly safety meeting, Klang was presented with a bouquet of pink roses. Then, in an unplanned moment, she handed out one of the long-stemmed roses to each woman in the room.

“I want to honor all of the hardworking beautiful women here,” she explained.

That gesture sums up Klang’s generous nature, says Katlin Owens, senior communications coordinator for CFI. “She has the experience, dedication, grace and heart to be an example for the industry,” Owens says. “Even with her accolades, she is humble and continues to deliver freight safely and on time. She has the right personality mix of warmth and outgoing that also makes her a joy to work with.”

At 21, Klang married a truck driver. She missed him when he was on the road and convinced him to teach her how to drive.

“He was not the most patient of trainers,” and she recalls crying a lot during her education behind the wheel.

Nevertheless, she was grateful for the challenge, and in 1979, she got her CDL. They drove team for 15 years.

However, because of his temper, he kept getting fired, and they had to start over with different companies. Finally, they landed at Con-Way (now CFI).

When her husband had a falling-out with the company, Stephanie was told that she was welcome to stay and drive solo. Klang says the encouragement created a strong bond of loyalty to CFI, and she continues to pull a dry van for the company over the lower 48.

In 1985, Klang and her husband divorced, splitting everything down the middle. He got the paid-for 18-wheeler. She kept the home in Diamond, Missouri, a former one-room schoolhouse, circa 1922, they’d renovated and expanded.

“When we went before the judge, he tried to encourage me to ask for support,” Klang says. “I politely declined. I had my home and my career and didn’t need anything further from my ex-husband.”

Driving solo for CFI included a steady supply of miles, plus perks such as health care benefits, vacation and sick leave.

“Trucking is one of the few professions where women earn the same as men,” Klang says. “When you are paid by the mile, there’s no gender discrimination.” She went on to be CFI’s first woman driver to achieve three million safe miles.

Once Klang was on her own, she felt the freedom to work hard and have only herself and her cat, Fred, to care for. She loved traveling the country, listening to NPR and devouring mystery, science and forensic novels on her downtime. During her earlier years, she put in serious mileage, staying out five weeks at a time and away from home 285 nights per year. The independence she has enjoyed is a major emphasis of hers when she speaks to women interested in trucking.

When she met Greg Klang, a CFI driver, she admired how careful he was with his finances – that and how he loved his cats.

Greg Klang says he’s proud of his wife’s achievements. “I definitely married up,” he says with a laugh.

Since their marriage in 2006, they’ve continued to add on to the house and develop gardens on their acre of property – and their merged cat family mostly gets along.

Klang says she’s now reached the career stage where she wants to give back to the industry she loves. CFI has made the logistics work for getting her off the road when opportunities arise. She represented CFI and the industry as an America’s Road Team Captain in 2013. The American Trucking Associations program selects safe, articulate drivers to represent the industry in various capacities.

Klang also was chosen for the Women in Trucking Image Team in 2015 and has been CFI’s chosen driver for charity events and speaking to Girl Scouts and high school students.

Highlights from her ambassador-type roles include a 2013 ridealong with the chairman of the National Transportation Safety Board, Deborah Hersman. In 2016, she took Federal Motor Carrier Safety Administrator Scott Darling on a ridealong. During the two-day trip with Darling, she expressed her views on electronic logging devices, speed limiters, safety techniques and other everyday driver concerns.

Klang has strong opinions on well-meaning regulations that are not always based on real-world experiences. One pet peeve is speed limiters.

“Cars get upset when we are traveling at 62 mph,” she says. “They think we are holding up traffic on purpose and obstructing the flow of traffic.” But she points out that while such regulations are in force, drivers must adapt.

For Klang, the honor of being named Overdrive’s Most Beautiful is a chance to further improve trucking’s image.

“Physical beauty is a genetic gift, but that kind of beauty fades over time,” she says. “What’s enduring is how you are inside, how you treat others, how you act. Those who have a beautiful spirit, a kind heart and a joy of living are never diminished by age.”

She smiles and adds, “I’m all for inner beauty, but don’t get me wrong – I definitely want my tiara!”

Suicide is reminder that control has its limits

It was Sept 9, 2001, and I was on I-35 south of San Antonio, heading home at 6:30 in the morning. I was laughing with a radio program on NPR when suddenly a car pulled out on the frontage road and then crossed the road.

I moved left, and my right steer tire went over the hood of the car. The truck jackknifed, and I held onto the steering wheel, trying to keep control. When I came to a stop, I was belted in, and people helped me out. Fred, my cat, was in his carrier, and they helped me get him, too.

Later, I read in the accident report that the kid was 23 years old and had told his family he was going to kill himself. He had just gotten back from a tough love session and was distraught. He took the car, and they followed after him. He was waiting for the first semi, and it happened to be mine. He died in the crash.

CFI was great and gave me a lot of support. I learned that you may think you are in control, but sometimes you are in the wrong place at the wrong time. I wasn’t angry with him for what he did, I just did what I do. I got back out there and started driving. But I always look at situations that don’t seem right and wonder what’s going on.