'All the terminals are shut down': Owner-ops' AB 5 protests hit Port of Oakland

Following last week’s protests over AB 5 at the ports of Los Angeles and Long Beach, port owner-operators on Monday began similar protests at the Port of Oakland that are expected to last at least through Wednesday.

As previously reported, the protests are in response to the Supreme Court’s decision late last month to decline to hear the California Trucking Association’s challenge to the law that upends the traditional leased owner-operator model in California.

Robert Bernardo, director of communications for the Port of Oakland, said Tuesday morning that while the full impact of Monday’s protest activity is unknown, there were “some disruptions of truck access at our marine terminal gates. We do anticipate that not as much cargo was delivered yesterday as one would see on a normal Monday.”

Bernardo added that the marine terminals at the port remained open throughout most of the day Monday but said International Longshore and Warehouse Union workers were not reporting to work at the SSA Marine terminal Tuesday. Attempts to reach ILWA to determine if the work stoppage were because of the trucker protests went unreturned as of publication time Tuesday.

Small fleet owner Bill Aboudi, employing company drivers now with his AB Trucking carrier, noted different events unfolding Monday and Tuesday, saying that “all the terminals are shut down” today as protestors ramped up efforts in response to what Aboudi sees as port officials’ attempt to downplay the protest impacts on Monday.

“For a government agency to do that, it’s pathetic,” Aboudi said. “State the facts, don’t spin it. You’re not a PR machine.” Port officials, he contended, too often act as if they only “consider the terminal operators and the steamship lines as their customers, and forget about the truckers. But we’re here. You need to consider us your partner; we certainly consider the port our partner.”

Aboudi contended events there on Monday were in fact a shutdown of three principal terminals with the exception of a few to several trucks hourly allowed through, mostly over-the-road haulers carrying refrigerated perishables. Many truckers all around the region “sat it out,” too, he said, slowing port activity considerably, which continued today. “A lot of the [Central Valley-based] truckers stayed home. When the port put out the messaging that there were just a few protestors but cargo kept flowing, today they’re showing that cargo is not going to flow.”

Expediting the shutdown of the port today was the reality, as Aboudi described it, of “longshoremen who showed up for work today, and they would not cross the line to work the ships. They said it’s just going to be a lost day.” He described the situation outside terminal gates as a scramble for trucks “working to find places to park their containers, especially those from the Valley. This is definitely a major disruption of the supply chains.”

Some among demonstrators are saying “let’s go five days,” he added.

As for messaging, Aboudi’s interaction with demonstrators reinforced what he already knew, essentially, their central point that AB 5 “is a bad law,” full stop, and calling for its repeal, he said. Further paraphrasing demonstrators, he added, “a lot of us are from minority communities out here and came to America for our freedom, and now we’re being burdened and told what to do.” Contracting carriers' messages to many owner-ops telling them they must become an S Corp, put themselves on a payroll system and do other things in efforts perhaps to satisfy the business-to-business exemption that exists for AB 5’s ABC test’s application to an independent contractor relationship.

Owner-operator Gurlal Dhillon, among demonstrating operators at Oakland yesterday and today, noted the carrier he's leased to, Best Bay Logistics, was telling its roughly 100 contracted owners to get ready to transition to having authority as it works to set itself up as a brokerage business. He underscored Aboudi's message that there's quite a lot of discussion ongoing about continuing the action through the week, though Dhillon was certain it would continue through Wednesday.

Demonstrators, essentially, are saying, “we don’t want to do these things,” Aboudi elaborated on the variety of AB 5 workarounds being considered for independent owners. After all, the additional cost and administrative work burden will just be incurred to get themselves into a situation where they can “go through all this jumping of hoops to do the same exact thing they were doing before.”

Dhillon, who in past has operated in other, non-drayage sectors with up to nine trucks at one time, indeed does the cost-benefit calculation around a shift to obtaining motor carrier authority and questions whether port work would make sense, given added costs, for a one-truck business. "It's one of those things," he said, that feels like his state's government is exercising "more and more of a hold on the private industry."

Driver recognized for helping woman who crashed into his truck

Truck driver Robert “Rocket” Miceli from Cranston, Rhode Island, has been named a Highway Angel by the Truckload Carriers Association for rescuing a woman who crashed into his truck and severed an artery. Miceli drives for Galway Bay Transport out of Arundel, Maine.

On April 23, around 11 a.m., Miceli was traveling through Natrona, Wyoming, during white out snow conditions. He encountered 50 mph wind gusts while driving and visibility was extremely low.

“My biggest fear was someone crashing into the back (of my truck),” he said. “It’s always been my biggest fear, and I’ve always told other drivers, especially new ones, sometimes slow is just as dangerous as fast; be aware of your surroundings.”

Unfortunately, in the difficult driving conditions, a woman crashed into the back of Miceli’s truck.

“I immediately get the truck stopped, jump out, hit 911, except I don’t have a signal,” he said. “So I rip the door open and the first thing I saw was her right hand -- she had literally ripped the steering wheel off when she hit, and it split her hand between the thumb and forefinger. It was nothing but bone.”

Miceli immediately pulled off his shirt, wrapping the gash to stop the bleeding. He said it took nearly 30 minutes for emergency response personnel to arrive, so he ran back to his cab to retrieve blankets and water. He was glad to see other passersby stop to help, as well.

The injured driver was taken to a hospital in Casper, Wyoming. Wyoming Trooper Baldwin assisted at the scene and thanked Miceli for his aid. “He said, 'You saved that woman’s life,’” Miceli said. “He told me the ambulance crew said she had cut her artery -- she’d have bled out.”

The day after the accident, he visited the woman in the hospital, meeting her family as well. “I got to hug her, and we cried, and it was really good stuff,” he said.

TCA presented him with a certificate, patches, lapel pin, and truck decals. Galway Bay Transport also received a letter acknowledging him as a Highway Angel.

The veteran-owned and operated coffee-on-order company will donate $1 for every sale to the St. Christopher Fund to help support truck drivers in need of assistance because injury or illness has taken them off the road within the last year.

Big Rig Coffee Company was founded in 2021 by U.S. Air Force veterans Hunter Wilson and Gabriel Massey, with the intention of providing 100% customer satisfaction and top-quality coffee to truck drivers.

“Big Rig Coffee Company’s desire is to give back from day one, and we are honored to be their chosen charity,” said Shannon Currier, director of philanthropy at St. Christopher. “We look forward to building our relationship with Hunter and Gabriel and their team as we work together to help truck drivers and support the industry we all depend on.” 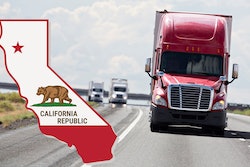 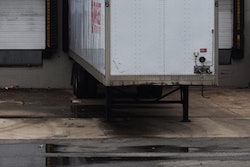 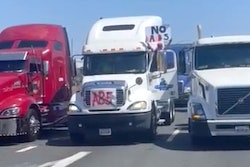