World Trade Bridge, Laredo, Texas, from the U.S. side.

Asked to weigh in on potential long-term impacts of opening the Southern border to long-haul traffic from Mexican carriers, readers are less than sunny on prospects for the more than $30 billion monthly trade that moves by truck either one way or the other across the United States-Mexico border. Today, the majority of it crosses behind border-transfer tractors largely owned by Mexican companies and operators, picked up by U.S. operators and driven into the interior.

As previously reported, worry over rates and opportunity for loads with destinations or origins in border towns dominated fears.

After assessing potential impacts mentioned by readers, we asked them to name the one they felt would be most significant long-term. Results follow:

The large concern over freight rates stemmed from the perception that Mexican carriers operate at a lower cost than their U.S. counterparts. From the perspective of driver pay, that’s true to one degree or another today, but it’s not on all scores. Fuel prices, by and large, run similar to, lately, higher than in the U.S. Some commenters wondered whether rates on domestic freight would see any impact whatsoever, as “Mexican carriers cannot make point-to-point deliveries within the United States,” noted Edward Smith at OverdriveOnline.com. “They will be able to deliver freight from Mexico and load up freight going to Mexico. So it will have no effect on rates for domestic freight.”

Others weren’t convinced, particularly if a long-term displacement of U.S. carriers on loads formerly transferred in border towns becomes a reality. “The loads that we have been picking up at border towns like Laredo, Texas, will be gone, as the Mexican companies will now be allowed to truck those products [from Mexico] anyplace in the U.S.,” wrote one anonymous commenter, “and the freight that took us to such border towns will now be hauled by the Mexican companies at a cut rate so that they can get back to Mexico. That is what I see close at hand.”

Some skeptics on such fears, however, urged calm. “Be real!” said Frankie Lobito, commenting at OverdriveOnline.com. “Big Mexican companies are not interested in hauling in the U.S. They have enough with their business in Mexico. And they don’t have to deal with all the regulations, breakdowns, the language and so on. And the small companies don’t really have the resources to afford such things. So don’t panic. This is politics as usual.”

Via Facebook:
Robert Martens: How is it they stated they didn’t get enough carriers to participate and those that did never really left the trade zone, but the data is robust? More FMCSA propaganda that counters the “safety” they keep saying is their mandate.

John Thaxton: They’ve been saying all last year that they aren’t getting enough data because of too few participants…. Now they say that’s robust? Well I guess it should have been expected.

Herb Zane: FMCSA had this in mind from the start.

Donald Timothy Koch: So…. When are we going to be allowed to drive in Mexico? Not that I want to. 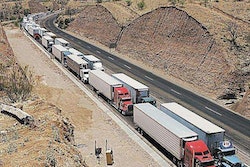