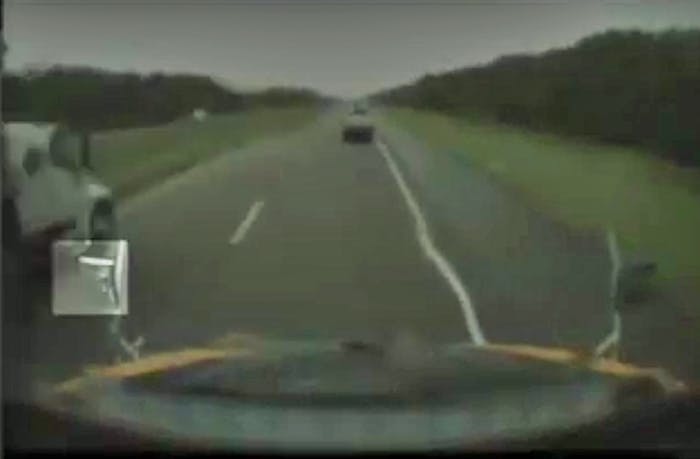 The video here shows Bulldog Hiway Express driver Guy Pippin’s run-in with a pickup on I-49 in Louisiana. Coming northbound and approaching the scene of another accident that had occurred on the southbound side of the road, just as Pippin passes a roll-back wrecker he says was stopped “in the left lane,” a “brown Toyota pickup was barreling up through there and locked up the brakes and hit the trailer.”

You can just see it, though you may need to zoom in on Pippin’s driver-side front mirror, visible in the video.

There “was no reason the guy couldn’t have seen” the roll-back, Pippin notes, who was “blaring with his big light bars. There’s hardly any missing him.” Hauling oversize, Pippin “had all my lights flashing, too. The load,” a big piece for a windmill turbine, “was wrapped all in white.”

The G-forces of the collision with Pippin’s open deck trailer weren’t sufficient to automatically trigger his truck’s SmartDrive dual camera to record, but he was lucky to have had the presence of mind in the situation to hit the manual record button, as the pickup’s driver “told the police officer he didn’t see anything,” period, Pippin says. “Though his pickup was torn up” – he certainly saw that.

“I told the officer there was a video,” Pippin adds. “I don’t know if he ever got to see it. It was a pretty clear case, but without that video there could have been questions about fault.”

Pippin notes the freight ultimately needed a “few thousand dollars’ worth of repairs.”

As for the trailer, Pippin calls it a “tough old trailer” – it was just fine.

Fortunately, no one was hurt in the accident. 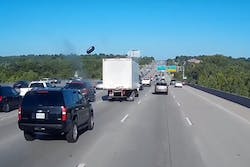 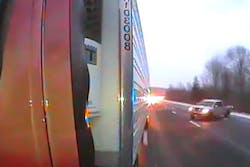 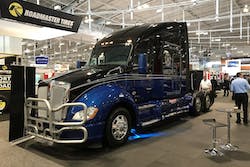