Artis Wiliams of Cat Trucking, a small fleet, in Jackson, Miss., inspects a truck at an auction in Mississippi. Used equipment qualifies for Section 179 depreciation, but not for the new bonus depreciation.

To hear truck dealers and manufacturers tell it, buying a new truck this year is your patriotic duty. Your purchase, they say, not only will boost the economy but will give you the financial benefit of so-called bonus depreciation.

Not so fast, say tax advisers: Unless your current truck is in such disrepair that it’s eating your profits, think twice before buying a new rig just to cash in on the federal tax windfall.

“Depreciation should be just a secondary factor in whether you buy a truck,” says Houston CPA John Turner, owner of The Trucker’s Accountant. “If you have an economic reason to buy this year, then depreciation might be something to think about. I always tell my clients that if they want to make a change in equipment, to call me first.”

The Economic Stimulus Act of 2008, signed by President Bush in February, increases the amount of first-year depreciation for purchases of new equipment this year to 50 percent from 30 percent. This so-called bonus depreciation is designed to enable buyers to reduce their tax liability and generate more cash flow.

Depreciation is an accounting principle used to measure the declining value of an asset. That loss in value is recorded as an expense on your income statement and balance sheet. It’s also an income tax deduction that allows you to recover some of the cost of an asset over a certain number of years. That allowance covers wear and tear, deterioration and obsolescence of the asset, according to the Internal Revenue Service.

There are two basic options for calculating depreciation on your return. The straight line method, which spreads depreciation evenly over the years, allows you to take the purchase price of the equipment and divide by the number of years of its useful life – which, as far as the IRS is concerned, is 36 months for a Class 8 truck. Thus the tax write-off for depreciation typically occurs over four calendar years.

If a truck owner, however, buys the vehicle in the first half of the year, he may choose to depreciate the value over three calendar years, Turner says. That would put the deduction at 33.3 percent each year.

A trailer is classified as a 60-month asset and depreciated on a six-calendar-year schedule. A comparable depreciation schedule would be 10 percent in the first and sixth years and 20 percent in the second through fifth years.

Straight line makes for more consistent financial planning and tax liabilities, says Omaha, Neb., CPA Perry Wiseman, owner of Truckers Accounting Service. While MACRS is an option, he stresses the need for owner-operators to “understand what the consequences would be,” he says. “Many truckers don’t realize it until it hits them in those later years.”

You’re also able to deduct a dollar amount of the value of the truck as an expense if you choose. Under IRS Section 179, you can declare a one-time expense for the year you put the truck or trailer into service and thereby reduce the amount on which you figure depreciation, or the cost basis. The Economic Stimulus Act upped the maximum amount you could declare to $250,000 in 2008 from $125,000 allowed last year. The act also increased the total value of assets you can purchase to $800,000 from $500,000 in 2007.

Wiseman offers an example: If an owner-operator bought a $150,000 truck, he could take a $50,000 deduction under Section 179 and depreciate the remaining $100,000 on a straight-line schedule. Or, to use the new limits of the stimulus act, the owner could deduct the entire cost of the purchase as long as it didn’t push his taxable income into negative territory. But then he wouldn’t have the truck’s depreciation to deduct in future years.

“You have to reduce the cost basis of the truck before you take the depreciation,” Turner says.

The stimulus prod, similar to previous economic incentives after Sept. 11 and Hurricane Katrina, hasn’t been taken up by any of Turner’s clients so far, he says.

“I tell my clients not to make their decision on whether to buy a new truck or other big asset on what they might potentially save in taxes,” Turner says. “If you are going to make the purchase anyway, then let’s evaluate whether to apply the depreciation to this year or next.”

Wiseman concurs. Some owner-operators tell him they always run a newer truck because they “don’t want to run out of depreciation. I don’t think that’s the way to look at it.” Wiseman stresses cash flow in his advising. What have your repairs been costing you in cash and downtime? What’s the monthly payment you can expect on a new truck, and how much will your insurance go up? “If you have a truck after four years that is running great, is getting good fuel mileage and has little downtime, I would say to keep that truck.”

One of Wiseman’s clients, Bruce Gerry of Omaha, Neb., bought a new tractor in 2007 because he wanted an additional tax write-off. The owner-operator, leased to National Van Lines, traded in a 2004 truck for his new rig. He also owns a 5-year-old trailer.

“Depreciation definitely helps in reducing your tax liability and, depending on how much you’re making, it can drop you into a lower tax bracket,” Gerry says. The 42-year driver says he’s thinking about buying a 2008 tractor with a different transmission – but not because he wants to use the bonus depreciation.

The tax bite when you sell
Tax advisers say many owner-operators, because of a misunderstanding about depreciation, miscalculate what they owe in taxes on ordinary income from their truck sale.

That’s not correct. If you sell a fully depreciated truck for $60,000, you owe tax on that full sale amount.

“According to the IRS, depreciation is meant to take an expense item and depreciate it over the useful life of the asset,” meaning that at the end of depreciation the item is – in the taxman’s eyes – valueless, says Perry Wiseman of Truckers Accounting Service. If you take all the depreciation but sell the truck, clearly it still has value. In such cases, Wiseman says, the IRS wants some of that value back.

One alternative is to trade the truck rather than sell it. When you trade, you reduce the cost basis of the new truck by the trade-in value of the old one.

Hurdles in the path of bonus depreciation
To get the bonus depreciation deduction of 50 percent under the Economic Stimulus Act of 2008, your purchase of a new truck or trailer must meet the following requirements:

Can I depreciate that new engine?
A tax regulation being considered by the IRS may clear up the confusion over how to treat the cost of major equipment repairs at tax time.

Tax advisers and IRS agents have debated whether a major expense, such as replacing a truck engine, should be treated as a capital expense or a depreciated purchase. This argument has applied to expenses as small as a $2,000 repair and a set of tires, says John Turner, owner of The Trucker’s Accountant.

Under the proposal, if the repair is less than 50 percent of the fair market value of the asset, you would expense it in the year of repair or purchase rather than depreciating it. 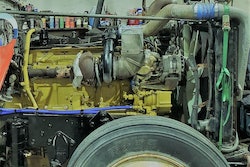