Shane Brooks, a professional truck driver for Pegasus Transportation of Jeffersonville, Ind., helped a woman and three children who were trapped inside their overturned SUV. For his help, he was named a Truckload Carriers Association Highway Angel

On the night of Feb. 15 at a temperature of about 20 degrees below zero, Brooks was driving along Interstate 94 near Jamestown, N.D., when a female driver passed him going about 70 mph. The woman’s vehicle slid on icy pavement and flipped onto its side in the median.

Brooks and another truck driver stopped to help. Brooks could see the woman had a baby and two other young children with her. Scared and distraught, they were attempting to kick the windows out. Brooks and the other driver helped get them out.

Brooks noticed they had no coats, so he took them inside his warm cab to wait until paramedics arrived. “It took 45 minutes for an ambulance to arrive. That’s a really long time for little kids to wait in such freezing cold weather. I was happy to help and hope someone would do the same for me or my own family if we ever needed it,” Brooks said. 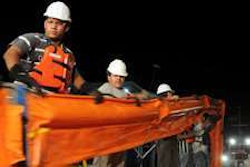