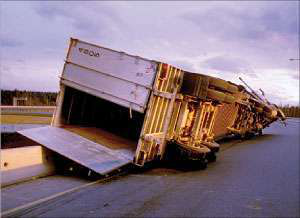 A federal study shows savings from using rollover stability systems throughout the industry would save more than $1 billion a year.

Like the best NASCAR drivers, with their tightly honed skills, fast reflexes, and years of practice, even top truckers can quickly get into a difficult steering situation. Two major brake component makers have introduced systems that can prevent a rig from rolling over or losing control when approaching a jackknife. These systems use many of the components that make ABS successful, and tap into the know-how industry engineers have developed around tractor-trailer dynamics.

There are the two basic system types, says Mark Melletat, director of trailer systems and fleet operations at Meritor Wabco. One is roll stability control. The other, full stability control, combines RSC with other technology to provide broader and more powerful corrective actions.

RSC “provides the highest value of vehicle rollover stability with the fewest components and maintenance requirements and the lowest cost,” Melletat says. “It continually monitors conditions that can lead to a rollover and can automatically de-throttle the engine and apply the engine brake, as well as the drive and trailer axle foundation brakes, to reduce tractor-trailer speed when lateral acceleration limits are about to be exceeded.”

For example, if a rig will roll over in a curve at 40 mph, but the driver is doing 46 mph, the system will slow the rig to below 40 to reduce centrifugal force.

Meritor Wabco calls its full stability control system Electronic Stability Control. It combines RSC with the added capability of yaw or rotational control. RSC includes a sensor that can tell when the tractor is turning around on its own axis, like it does when starting to jackknife.

“ESC can reduce the risk of vehicle instability while in a slippery curve or taking an evasive action, preventing jackknife and drift-out conditions through selective braking of the tractor and application of the trailer brakes,” Melletat says. “If loss of stability is detected, tractor-trailer speed is reduced through engine control and application of the engine brake, tractor and trailer foundation brakes.”

Fred Andersky, director of marketing at Bendix, describes road conditions that could activate Bendix’s comparable technology, Electronic Stability Program. “Let’s say a car cuts in front of a tractor-trailer, and the driver swerves abruptly,” he says. “This starts a chain of events leading to rollover. The system at first mitigates the situation, preventing loss of control, and prevents rollover.”

Andersky says the system incorporates ABS wheel speed sensors plus a lateral acceleration sensor that measures force being generated on a curve. For full stability control, a steer axle sensor is added, as well as a yaw rate sensor. The steer axle sensor tells the system how far the steering wheel is from the center position and which way the driver is steering. The yaw rate sensor works like a gyroscope. It detects how fast the tractor is turning on its axis. That’s how the system knows if the driver is headed toward a jackknife.

But the ability to control the steer axle brakes also allows ESC to do what even the most skilled truck or racecar driver can’t – apply the brakes selectively to straighten out the vehicle. Andersky says that in a loss of control, not just a rollover, “full stability can control which brakes apply and when. Suppose the tractor is jackknifing to the left. The system will just apply the right/front steer axle brake and the trailer brakes. It will slow the vehicle, but also redirect it to where the driver wants to go.”

Melletat says that in some applications Meritor Wabco’s RSC can apply the front axle brakes. The ESC system includes a brake pressure sensor to report to the system what the driver is doing with the brakes to effectively apply appropriate pressure levels.

Radar, often used to catch speeders, can also be employed to warn a driver whose speed and following distance indicate an imminent front-end collision. Eaton Corp. developed the Vorad Collision Warning System and later integrated it with vehicles’ cruise control systems. Bendix purchased the Vorad system and integrated it with its ESP, renaming the combination Bendix Wingman ACB (Active Cruise with Braking).

Because these systems work with other safety systems, they can prioritize the alerts.

“For example, if you have an indication of lane departure and an impending collision, you can have the system indicate an impending collision first,” Andersky says. “Audible alerts can vary in sound from one another so the driver will know what the alert means without needing to look away from the road.” An integrated system also costs less than the component systems installed separately.

When the system detects danger, it de-throttles the engine and, if necessary, employs the engine brake and even the foundation brakes to slow the rig until its speed matches the speed of the vehicle in front. This saves the driver from constantly resetting cruise speed control to follow slower vehicles. This function operates in cruise only, but a version available by year-end will work all the time.

An optional switch allows the driver to set following distances (figured as the time) from the default value, 2.8 seconds, up to 3.5 seconds. Wingman ACB has also been upgraded to provide warnings and alerts on stationary objects.

Bendix also offers the Vorad system with active cruise, a system that does not require ESP. The major cruise control-related performance difference with Vorad is that its active cruise function de-throttles the engine and uses the engine brake, but it does not activate the foundation brakes to hold the vehicle at a satisfactory following distance. Vorad alone can be retrofit, while Wingman ACB is available only on new vehicles.

Meritor Wabco offers a similar product, the OnGuard Collision Safety System. Melletat says, “OnGuard is an Adaptive Cruise Control (ACC) and Collision Warning System (CWS). ACC is a radar-based tracking system that works in conjunction with standard cruise control to maintain the set cruise speed when no vehicle is being tracked, but maintains a safe following distance when a target vehicle is being tracked.”

The safe following distance is maintained by controlling the engine throttle, the engine retarder and the foundation brakes without driver intervention, Melletat says. When the target vehicle is no longer being tracked, the set cruise speed resumes automatically.

“The CWS provides the driver with an audible and visual alert to a potentially dangerous driving situation,” he says. “It is integral with the ACC, but also functions when the cruise control is not being used. If the driver is following too close behind another vehicle at a steady driving speed, the following distance alert emits an audible tone and the in-cab dash display screen turns yellow. This alert ends when the driver’s vehicle speed drops below the lead vehicle speed and the following distance is increased.”

Melletat says that with the cruise control set, the system provides engine throttle and retarder control, as well as foundation brake activation, if necessary. This automatic brake application is intended only to provide early braking as the driver is recognizing and reacting to the situation. It is also the driver’s responsibility to apply the brakes in response to the collision warning, he points out.

The Wingman ACB system records data such as following distance and hard braking events. Andersky says, “The fear is that such data can be used against you in court. In fact, fleet managers are embracing such data. You can act on the information in deciding whether to settle or go to court. If your driver performed effectively, you can use this evidence in court. And if the evidence shows your driver was at fault, you can settle the claim instead of fighting it through litigation.” n

The cost of stability

Bendix rep Fred Andersky says list price on the Bendix rollover system is over $1,500 and on the full stability control nearly $2,300. The final price is up to the truck maker. For some new models, the system is standard equipment.

Meritor Wabco’s rollover system runs between $800 and $1,000, reps say, while their full stability system is $1,800 to $2,100. These figures refer to the systems installed on the tractor that also apply the trailer brakes when appropriate and stabilize the entire rig. 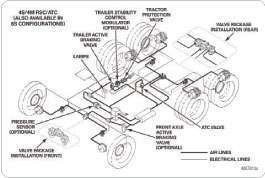 MERITOR WABCO ELECTRONIC STABILITY CONTROL --In addition to components that come with Meritor Wabco’s roll stability system, the company’s Electronic Stability Control also includes steering angle sensor and ESC module that can determine when the tractor is starting to jackknife. It then applies brakes selectively through the active braking valves to straighten the jackknife.

A 2009 report by the National Highway Traffic Safety Administration showed that if all existing five-axle tractor-trailers were equipped with roll stability control, there would be 3,489 fewer crashes, 106 fewer fatalities and 4,384 fewer injuries per year, says Meritor Wabco’s Mark Melletat. Savings from rollovers alone would be $1.4 billion.

So does equipping vehicles with such systems earn a discount on insurance rates? Not yet, Andersky says. However, “your risk profile is what insurance companies look at. Fleets not doing things like spec’ing or retrofitting such systems will end up with a higher premium,” he says. With the implementation late this year of Comprehensive Safety Analysis 2010, “you need to be doing such things to improve your incident rate.”

Andersky warns that these systems won’t compensate for poor driving habits. “You can overdrive the system. It cannot replace a good driver.”