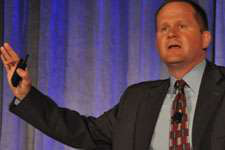 “Why do you buy a truck?” FTR Associates President Eric Starks asked a gathering of several hundred fleet, truck-maker and supplier executives and others on hand for the Commercial Vehicle Outlook Conference in Dallas Aug. 25. “To move freight” came the answer from the audience, prompted by a message lit up on dual video screens behind the presenter.

Though he had to ask the question a couple times to get the crowd responding, the implied message rang clearly. The concern over the last several years’ freight picture linked everyone in the room, and though “substantial downside risks in the marketplace” make positive forecasts difficult, Starks said, his transportation forecasting and analysis firm’s Trucking Conditions Index suggests the trucking industry “will feel better and better through June 2011.”

The conference was prior to the Great American Trucking Show, running Aug. 26-28.

For freight volumes, truck sales and driver supply, though, the question of degree looms large. Given the substantial hit the entire economy took in 2008 and most of 2009, Starks said, “We are going to have to see some heavy-duty growth just to get us back to where we started” to decline.

But slow growth is still growth, he said, and he was optimistic on several fronts, noting that a double-dip recession appeared unlikely aided by a continuing strong manufacturing sector as well as other sound fundamentals. A “growth recession,” he said, in which recovery is so slow as to seem as if the recession is continuing, “is fairly more likely to occur,” barring a global financial event.

Rates fleets could demand from shippers should continue to rise. “In general,” Starks said, “the trucker will have the upper hand in the rate environment.”

Starks sounded good news for driver pay. Demand is already exceeding supply in the driver hiring pipeline, Starks said. And “CSA 2010 will be a huge problem” as well, he said. “The industry will struggle to keep drivers in the system.”

“This tells us we’re looking at a driver shortage of unprecedented levels” by mid-2011.

On Class 8 truck sales Starks forecast manufacturers could expects orders of “148,000 factory shipments this year, 188,000 in 2011 and 257,000 in 2012.” Finally, he added, “we’re only getting back to recessionary levels” during that period because of significant overbuying leading to the recession.

Another illustration of this effect was in the truck scrappage rates, which historically have been well under retail sales. In the past, if a fleet scrapped a truck, Starks noted, it bought a new one. “This time if you scrapped it, odds are you didn’t replace it.” This downturn marked the first time sales fell below scrappage rates since 1990-91.

Starks tempered all these data and his shorter-term forecasts with a reminder of the lengthy recovery time following the last big recession in 1980. “The last time that we saw a recession like this and a recovery, it took us 15 years to get back to the previous peak [truck sales] levels.”