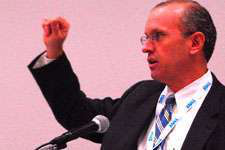 Last November, when the Hurricane Express v. Arkansas Workers’ Comp Commission case was decided against the motor carrier, alarm was voiced among truckload carriers. And rightly so, attorney James C. Sullivan told attendees of the Truckload Carriers Association’s Independent Contractor Division Annual Meeting in Dallas, Aug. 26. “This case should be cause for concern for everyone,” he said. “I bet a lot of you run a business model similar to Hurricane Express.”

At issue was classification of leased owner-operators as independent contractors. Sullivan suggested that as carriers have competed to attract and retain the best owner-operators and drivers in the business, a long erosion of the traditional owner-operator model (in which an operator came to the carrier with a truck he/she already owned) has taken place. “What we have now,” he said, included questionable (for independent contractor classification purposes) practices such as non-traditional lease-purchases amortizing the amount of purchase over the lease term with no significant down payment or balloon payment.

Also, a great deal “more products and services are offered by motor carriers to owner-operators,” he said. “The trend has been to erode away the traditional owner-operator status. That trend needs to start turning back in the other direction.”

In the Hurricane case, the court, using a 10-factor right of control test to determine whether independent contractors were legitimate, found that the owner-operators were misclassified and were employees, despite the fact that, like many others in the industry, Hurricane did many of the right things. Their contracts clearly identified owner-operators as independent contractors; they did not control where to make fuel purchases or repairs or what route to take; drivers were not obligated to haul loads.

The penalties in such cases can be numerous and costly. “The stakes are pretty high,” said Sullivan, whose work with the Polsinelli Shughart law firm in Missouri has been focused for 20 years on carrier/owner-operator relationships. Fines and penalties for misclassification can include “liability for state, federal and local back taxes, social security contributions of both the employee and the employer, federal unemployment and state unemployment taxes, penalties and interest.”

Carriers, he said, could be advised to limit both their financial and behavioral control of leased owner-operators as much as possible. Court findings determined to support the employee classification in the Hurricane case were that drivers were integral to the carrier’s business, hauled exclusively for the carrier displaying the carrier’s logo, and ran trucks under a lease (rental) relationship with a Hurricane-affiliated entity that required the driver to haul for the carrier and required service to be done by a mechanic approved by the lessor, among others.

While this case only held implications relating to Arkansas worker’s compensation insurance, and Sullivan believes that the employee/independent contractor battles will most likely continue to play out in state legislatures and courts, federal attention has been growing the last four or five years.

Federal agencies have announced several initiatives within the last 12 months, he said. The Internal Revenue Service is increasing the number of audits it will conduct of employers who classify workers as independent contractors, though this may largely target the construction industry. “The Department of Labor has announced this year that they have implemented an employee misclassification initiative,” Sullivan said, allocating $12 million for field investigator training and pledging an additional 4,700 investigations.

And while Section 530’s “safe harbor” provisions for employers who have a “reasonable basis” due to legal precedent, past IRS determination or longstanding industry practice would at present keep most owner-operator truckload carriers safe from IRS prosecution, Sullivan said safe harbor’s days “may be numbered because of what has been termed the Employee Misclassification Prevention Act.”

Introduced in April in both houses of Congress, it would “amend the Fair Labor Standards Act to make it a violation of the act to misclassify employees as independent contractors,” he added. “The requirements are quite onerous. It requires businesses to keep records of all ICs – exactly the same type of records required as all employees…. You have to give specific notice that you’re being classified as a nonemployee rather than an employee. It creates a presumption of employment if an employer fails to keep records or provide required notice.”

“This is right now pending before both relevant committees in each house of Congress – it has been argued and debated,” Sullivan said. “I believe it will not make it out of either before the November elections. But I don’t think the issue of federal law is dead. This has been raised for the last four or five years in one form or another. The 2007 version of the bill was actually introduced by President Obama when he was a senator.”

Sullivan likewise advised carrier representatives of several Owner-Operator Independent Drivers Association-filed cases against specific motor carriers that had implications for legal changes in Truth in Leasing regulations Part 49 C.F.R. 376.12(d) and (h), relating to compensation and charge-back items. He made several specific recommendations:
• “If you pay your carriers on a percentage basis,” he said, any computations for deductions made relating to chargeback items or any fees must be clearly stated in the lease.
• Carriers must clearly tell owner-operators in the lease “that you’re marking up an item if you’re marking it up.” The question of whether carriers needed to note the actual amount of markup or simply provide the standard chargeback rate in the lease and the amount of actual chargeback, with any fee, on the back end in a settlement was not yet settled, he added.