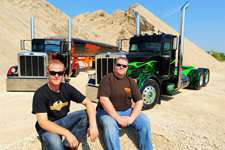 But what all five of these customized big rigs have in common is they hauled away the Best of Show trophies at the end of the annual Custom Rigs Pride & Polish truck beauty show held in conjunction with the Great American Trucking Show (GATS) in Dallas.

This year’s GATS Pride & Polish show drew 53 customized bobtails and combos to the Dallas Convention Center, coming from as far away as California.

“This year’s truck show was one of the best we’ve had,” said Neil Holsomback, the on-site manager of the Pride & Polish events. “The judges really had their work cut out for them because there were a lot of very nice trucks competing against one another in multiple categories.”