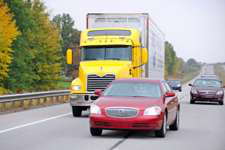 In a study released April 20, the American Transportation Research Institute revealed that truck drivers with certain driving records (i.e. prior crashes, violations and convictions) are more susceptible to being involved in a future truck crash than their peers with clean driving records.

The analyses in the report draw on data from 582,772 U.S. truck drivers over a two-year timeframe to expose a dozen driver behaviors that raise a driver’s risk of being involved in a truck crash by more than 50 percent.

“This research represents a major step forward in helping carriers sift through and prioritize the vast amount of information associated with driver MVRs (motor vehicle records) or the new PSP (pre-employment screening program) system,” said Keith Klein, Transport America executive vice president and chief operating officer. “By understanding how driver histories relate to future crash probability, carriers can develop targeted solutions for minimizing future safety risks. It is no coincidence that safety tends to improve as the prevalence of these problem behaviors decline.”

The ATRI study compares the new findings to a series of parallel analyses the organization conducted in 2005, demonstrating the stability of numerous behavior-based crash indicators. Meanwhile, differences between the two studies highlight safety improvements the industry has seen since 2005, including record-low 2009 truck-involved crash rates and overall reductions in the percentage of roadside inspected drivers found violating any of FMCSA’s Federal Motor Carrier Safety Regulations.

To continue reducing the occurrence of crashes and crash-related behaviors, ATRI reports on enforcement and industry-best practices it says are capable of addressing the problem behaviors identified in this study. ATRI also provides a list of “top tier” states that emphasizes those states that have proven track records of maximizing their enforcement resources while minimizing their share of the nation’s truck crashes.

“The enforcement community is increasingly being asked to do more with less,” said Steve Keppler, executive director of the Commercial Vehicle Safety Alliance. “Research such as ATRI’s ‘crash predictor model’ can assist roadside inspectors and law enforcement officers in targeting specific driver behaviors that are more closely associated with increased likelihood of a future crash.”

The report is available at www.atri-online.org.