On a cold March morning, at a table overlooking the Mack and Volvo corporate campus in Greensboro, N.C., I asked Kevin Flaherty, senior vice president for Mack in the U.S. and Canada, if I detected a bit of swagger at this century-plus-old American company.

“I don’t like the word swagger,” Flaherty said, laughing. “It has too much in common with cocky. And we’re definitely not cocky. But Mack is in a really, really good place these days.”

The new Mack engines with ClearTech selective catalytic reduction technology, he said, were “a home run.” A few days later, at an industry event in Louisville, Ky., Flaherty would underscore his point by announcing a 12 percent increase in fuel economy for 2010 Mack diesel engines on trucks equipped with new Mack aerodynamic equipment, compared to their 2007 counterparts.

My path to Louisville required driving a 2011 Mack Pinnacle A/B with a 70-inch mid-rise sleeper across the Smoky Mountains. David McKenna, Mack’s director of powertrain sales and marketing, accompanied me. Dave’s job would be to point out the features of the 505-horsepower Mack MP8, coach me on the proper use of the Pinnacle’s mDrive 12-speed automated manual transmission and generally keep me company on the 500-mile run.

Automated manual (AMT) and automatic transmissions are making tremendous inroads in the heavy-duty market. Flaherty believes that in just a few years, 40 percent of new Mack trucks will be spec’d with mDrive AMTs.

The industry’s early models faced reliability issues while operating under rugged applications. Manufacturers have steadily improved dependability, though the real breakthrough has been the increasing sophistication of onboard electronic control modules. These mini-computers allow components to “talk” to each other and tailor their performance to match the driver’s needs.

McKenna said the mDrive senses the rig’s weight and also uses an inclinometer, which means it can sense road grade. Using this information, the transmission relays to the engine and the engine brake how much available horsepower and torque is required to get the load moving or slow it down. The mDrive makes thousands of split-second calculations to determine the correct gear and shifting sequence to give the optimum amount of power.

“The secret to why it works so well with Mack MP engines is that data stream,” McKenna said. “When we install a supplier-built transmission in one of our trucks, we provide that transmission with only about 80 percent of the data generated by the engine and engine brake. We’re not going to give out all of that information: It’s like giving the formula for Coke or Kentucky Fried Chicken away. But the mDrive has access to 100 percent of our powertrain telemetry. And that makes all the difference in the world.”

A transmission can analyze all the data in the world, but it cannot replace a human in dealing with traffic and changing road conditions. That’s why Mack and Volvo engineers designed the mDrive with intuitive, easy-to-access manual controls.

I learned this first-hand as I started up a long freeway ramp. I hit the mDrive’s “Perform” button, telling the transmission and engine I needed extra horsepower. The mDrive switched to a more aggressive gear selection and shift sequence while the MP8 diesel churned out additional horsepower. Once at cruising speed, the mDrive disengaged the boosted performance mode and we settled in for a long drive west.

It was on long descents where I gained a full appreciation of the mDrive. After letting me fan the brakes down a few long grades as a warm-up, McKenna suggested letting the transmission hold us on the next one. At the next crest, I manually downshifted from 12th to 11th gear. The engine brake, working with the transmission, kept my desired speed.

My foot hovered over the brake pedal, waiting to pounce if our speed started to get away from me, but this transmission held its own. On a few really steep grades, an additional downshift to 10th gear was in order, and the mDrive easily met the challenge.

It was just as effective when climbing. It downshifted as needed with no casting about for the right gear. And once we were on the western edge of the Smokies, the mDrive worked with the cruise control, engine and engine brake to maintain speed without engine over-revs or sudden spikes in fuel use. All told, it’s a slick, intuitive system.

AUTO NEUTRAL – Transmission shifts to neutral if the engine is turned off while still in gear or when parking brake is applied.

GRADE GRIPPER – Holds the service brake on grade until the throttle is applied.

Cruise’n Brake – Provides engine brake operation while in cruise mode until target speed has been reached.

MACKCELLERATOR – Allows the driver to manually raise the engine RPM while automatically shifting to a lower gear, affording higher RPM and increased horsepower to assist with a quick pass without taking hands off the wheel or eyes off the road. 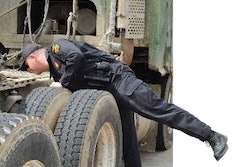 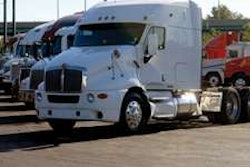 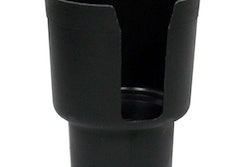 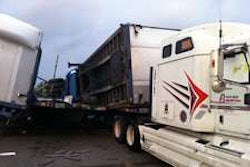