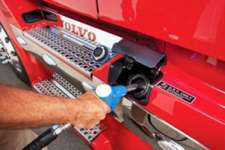 Navistar has filed another suit against the U.S. Environmental Protection Agency, in the latest round in the ongoing battle between the exhaust gas recirculation-only engine manufacturer and its competitors that use selective catalytic reduction technology to meet 2010 diesel exhaust emissions regulations.

Navistar opted to use in-cylinder EGR technology to meet current standards in conjunction with banked EPA credits for meeting and exceeding pre-existing emissions regulations in effect prior to the 2010 regulations.

Navistar alleges in the suit filed July 5 with the U.S. District Court for the District of Columbia that the truck maker, a contractor it hired and the California Air Resources Board all say nitrogen oxide emissions skyrocket when drivers don’t keep diesel exhaust fluid topped off, rendering EPA’s rule “irrelevant” altogether. Furthermore, Navistar accuses EPA Director Lisa Jackson of not doing her duty to uphold the Clean Air Act and her agency of not doing its part to protect public health.

Navistar Public Relations Manager Stephen Schrier said the lawsuit is about ensuring level competition in the heavy-duty truck market. He notes that testing done by Navistar shows that operators can “defeat” SCR systems by adding water or other substances to the system instead of DEF, allowing trucks to operate indefinitely in violation of 2010 emissions regulations.

SCR engine manufacturers, however, say the lawsuit is nothing new. “We think the complaint is frivolous, and that it won’t go anywhere,” said Brandon Borgna, media relations manager for Volvo Trucks. “The market has already decided that SCR-equipped engines are the preferred choice in terms of performance and fuel economy, as well as the environment. And EPA has said they believe the technology is highly effective. We intend to file a motion to intervene.”

John Walsh, director of media relations for Mack Trucks, echoed Borgna’s sentiments. “Given the history, we’re not surprised by this,” Walsh said. “It sounds like more of the same. The irony is that a year and a half after the regulations went into effect, they still can’t meet the standard without credits, and their trucks are still spewing two-and-a-half times the pollutants allowed. We think their complaint has no merit, and we intend to file a motion to intervene.”

EPA last month updated its guidance for certification of truck engines using SCR to reduce emissions, calling on SCR engine makers to continue developing warning systems that alert drivers when the truck’s DEF tank is nearly empty or filled with a liquid other than DEF.

The new guidance, mostly in response to previous claims made by Navistar that SCR technology can be circumvented, also urged OEMs using SCR to research methods that would inhibit tampering with SCR system operation and incorporate further inducements for drivers to comply.

Navistar previously had sued both EPA and CARB over their acceptance of SCR technology without stronger measures to prevent engine operation without DEF or an operational SCR system. The truck maker last year settled both lawsuits by garnering a commitment for further review.

Research cited by Navistar was conducted by EnSight, an independent environmental consulting firm, using two long-haul vehicles and one heavy-duty pickup, all of which used SCR. According to Navistar, EnSight’s research showed that when liquid urea was not present, there was little or no effect on the vehicles’ operations.

However, EPA said in its recent guidance that testing of SCR systems had yielded mostly positive results. While the agency said Navistar’s findings arose from intentional attempts to circumvent the SCR system and that the majority of operations using SCR would be in compliance, it encouraged manufacturers using SCR to seek methods to impede tampering.