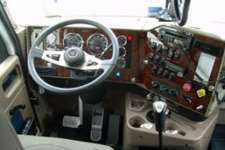 As driver pools tighten, carriers are offering sign-on bonuses as high as $10,000 and other incentives to attract owner-operators.

Over the last year, several carriers have increased per-mile and fuel rates, posted bonuses and reduced truck-lease payments to compete for operators or persuade company drivers to convert to ownership.

FFE Transportation has restructured its Drive-To-Own truck lease program by reducing weekly payments and balloon amounts and extending manufacturer warranty programs. In January the carrier launched a driver academy to train applicants looking for a CDL and to educate them on potential career paths.

“We want to grow our operators,” says Rob Newell, a vice president at Dallas-based FFE Transportation. “Let’s face it, we’ve lost so many of them in the last three to four years.”

All-owner-operator Roadrunner Transportation Services is offering up to a $10,000 bonus spread over five quarters to experienced operators who sign on to the company’s linehaul division, says Mark Pluff, director of linehaul development. He says the bonus varies depending on lanes where the company wants to add power. He declines to divulge how many operators have signed on, but adds the program has exceeded expectations and will be continued.

In August, small all-owner-operator carrier Christenson Transport is increasing contractor pay from 88 cents a mile to 91 cents and adding 5 cents a mile for East Coast routes. The Springfield, Mo.-based carrier offers a $3,500 bonus that is paid by reducing truck lease payments by $75 a week, says Barry McGowen, vice president. “We also pay half the per-mile rate for the first 100 empty miles and increase the percentage as the mileage goes up,” he says.

In February, Barr-Nunn Transportation increased its Pure Pay base rate for owner-operators 3 cents a mile to $1 a mile and 10 cents a mile to 80 cents empty, says Jeff Blank, director of recruiting for the Granger, Iowa-based company. The carrier also offers a Band Pay program that pays on length of haul.

“We’ve probably realized a 15 percent increase in our recruiting this year,” he says. “We’d like to go to 200 owner-operators if we could get them,” up from the current 125.

About 70 percent of the recently added contractors are new to ownership, while the rest were existing owner-operators, Blank says. Earlier in the year, the carrier converted several Barr-Nunn company drivers to ownership. Now the company is attracting more drivers from other carriers who want to become owner-operators.

On June 1, Jacobson Companies of Des Moines, Iowa, increased new operator pay to 95 cents a mile from 93 cents, while also raising existing operator pay by 2 cents a mile. That followed a February increase in the carrier’s sign-on bonus for contractors to $2,500 from $1,000, payable over 90 days, says Joe Santone, vice president of carrier services for the company that works with about 75 contractors.

“All carriers are struggling [to find operators], but over the last 45 days, our recruiting is up about 20 percent,” Santone said. “We’ve changed some of ourads to emphasize the bottom line and the rate increase.”

Among other owner-operator pay developments at carriers: