We ride along, listening to the radio, sometimes for hours on end, without saying much to each other. It’s a comfortable silence, especially for George, and I take the time to review my notes, write posts and plan out feature stories I’m going to do. Every once in a while, I’ll come upon a set of notes that are so ridiculous, even I can’t make sense of them. I should destroy all of my notes, because if anyone got hold of them, they’d surely think I was nuts, and possibly dangerous. If I’m not on the “no fly” list already, I would most definitely be put on it after someone fished the scrap of paper tucked into my notebook that had the words airplane and bombs with question marks and exclamation points all over it. It’s easy to think anything other than that I saw two flatbeds, one behind the next, with an airplane fuselage on the first and what looked like bombs (George said they were air tanks, but I like to think they were bombs) on the second. So yeah, I need to get rid of the notes.

I found a folder tagged “Anne Prep” the other day. It was full of questions I had for Ms. Ferro when I got to meet her at MATS. As it turned out, the only question I got to ask was if she had a driver’s license, and then the interview was kind of over. It made me laugh out loud to review the earnest queries I had in the folder, I was silly enough to think I was really going to get to ask her about her childhood, like I was flippin’ Oprah or something. I get a little carried away sometimes.

“What are you laughing at?”

“I just found the folder with my questions for Anne in it.”

“I guess you’re gonna trash that one.”

“Uh, babe, they’re not gonna let you within a hundred yards of Anne Ferro, ever again.”

“Oh come on. I’ve only taunted her a little. She’ll talk to me again. We’ll have lunch or something.”

“You really are delusional.”

“Pffft. I’ll get to ask her another question one day. I think I’m just going to approach it like my Mom would.”

“That’s a terrible idea, your Mom is kind of scary.”

“She’s not scary, she just talks to generals and stuff a lot, she’s firm.”

“No, seriously. I’m going to take her by the shoulders and just give her a look that says, ‘you disappoint me more than anything in the world’ and ask, “What in heaven’s name is wrong with you?’”

“Should I say ‘What in the name of Jesus is wrong with you?” instead? Mom only says that when she’s truly concerned.”

“Really? You think I should go straight to God? Wow. OK, I’ll write that one down, too.”

He said a bunch of other stuff about how he was worried for my sanity, but I wasn’t really paying attention, because I was busy writing notes in the margin like “firmly shake,” “maintain rigid eye contact” and “don’t whisper — menacing.” Also, I cleared my lunch schedule, just in case she calls. 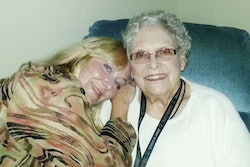 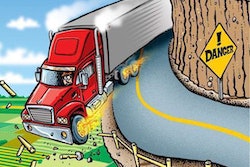 Brake failure! What to do when your rig won’t stop