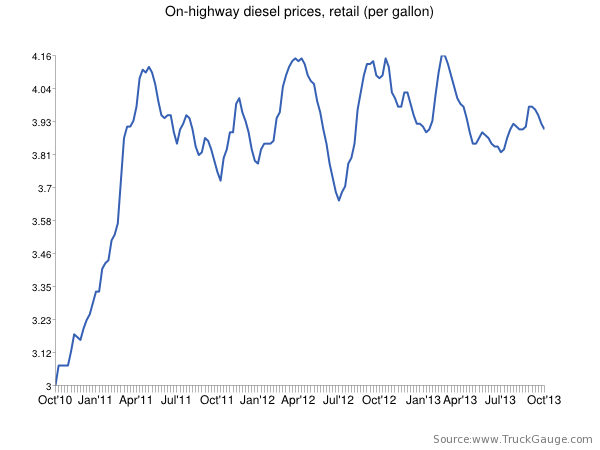 The national average price for a gallon of on-highway diesel dropped again in the most recent week — ended Oct. 7 — falling 2.2 cents to a $3.897, according to the Department of Energy’s Energy Information Administration.

The price has fallen every week since the week ended Sept. 16 and, in that span, has fallen 8.4 cents, which is the biggest streak drop since a 10-week period in March, April and May when the national average price fell more than 31 cents.

Moreover, diesel fell to its lowest point in nearly two months in the week ended Oct. 7. The price is also 19.7 cents lower than the same week last year.

The average price also fell in all regions in the U.S., led by a 3-cent drop in the Central Atlantic region. California has the country’s most expensive diesel, at $4.15 a gallon, and the Gulf Coast region has the cheapest — a $3.805 average.

Pro Miles’ Fuel Surcharge Index, which measures prices paid at the pump, shows a week-to-week drop in the national average of 1.6 cents to $3.895.

Overdrive‘s Daily Newsletter includes a daily roundup of fuel prices from around the country, compiled by Pro Miles. Click here to sign up to receive it.