Oh my gosh, it’s better than Christmas. We’re actually leaving the house this week, which is a good thing because we may starve if we have to wait much longer to work. We’ve filed our papers, been inspected, paid tons of money, begged for mercy, sacrificed three goats and a fatted calf, and signed our lives away for the next two years.

Here’s what I have to say about truck ownership: It’s an awesome thing, but if you’re doing everything by yourself, without the aid of a dealership, do your homework and expect for everything you read up on to be different when you get to the window to pay. We have had the benefit of Landstar and the Owner-Operator Independent Drivers Association as resources for information. I would strongly suggest becoming a member of OOIDA if you plan on owning a truck. It just makes a lot of things easier. Information is all in one place and you can actually speak to human beings, which is a giant plus in my book.

Landstar has been nothing but helpful, all of our questions are answered right away and anything they can do to expedite getting us on the road has been done.

I will say this — we’re being treated totally different than we were when George was a company driver. He has worked for two of the three giants, and you can rest assured we didn’t get the same considerations he gets as an owner-op from either one of them. He had one dispatcher who was outstanding, but beyond that, it was mostly a constant churn of people on both ends with a truck number as his only identifying marker and freight that was valued more than the driver hauling it.

Even as a leased owner-op, working for the giant companies with thousands of trucks on the road sometimes boils down to being a number in the system. It’s unfortunate, and I firmly believe it’s one of the reasons the quality of drivers being churned out by these trucking puppy mills is so poor. They spend a huge amount of money on recruiting, and none on retention. They don’t care if you’re a competent driver, until you prove you’re not a competent driver. Then they fire you and put the next warm body in a seat. It’s hard to succeed when the company actually profits on your failure by being able to pay crap wages because of inexperience. That’s a nasty cycle, and if the FMCSA is really concerned about safety, they’ll address wages and churn before they make any more provisions for milk-and-cookie breaks.

We’re fortunate for the opportunities we have and we’re thankful to have them. It bears to be noted that George worked his tail off to make this happen, and he’s going to have to work his tail off to keep it afloat, but he’s completely up for the challenge. 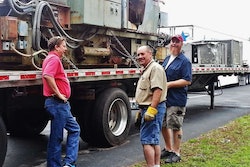