President Barack Obama did talk infrastructure funding and turning the U.S. more toward natural gas a primary fuel source Tuesday in his fifth State of the Union address, but both came almost in passing and added on to a spot in his push for tax reform or job creation.

He challenged Congress to take steps to bolster natural gas infrastructure and to use money from potential tax reform to invest in infrastructure and highway funding, and also said he would take any unilateral steps possible to “slash bureaucracy and streamline permitting” for major infrastructure projects.

“We can take the money we save from this transition to tax reform to create jobs rebuilding our roads, upgrading our ports, unclogging our commutes — because in today’s global economy, first-class jobs gravitate to first-class infrastructure. We’ll need Congress to protect more than 3 million jobs by finishing transportation and waterways bills this summer. That can happen.”

Natural gas, the president said, can help push the U.S. closer to energy independence, calling it “bridge fuel that can power  our economy.”

“I’ll cut red tape to help states get those factories built and put folks to work, and this Congress can help by putting people to work building fueling stations that shift more cars and trucks from foreign oil to American natural gas.”

Obama also said his administration would work this year on tightening fuel economy standards for trucks to help drive down the amount of oil imported and at-pump fuel prices.

He also recognized a trucking company owner, Andra Rush, who founded and still operates the 700-truck Rush Trucking. However, he did not mention the trucking business, but instead recognized she and her family for its Detroit Manufacturing Systems business.

Industry response was lukewarm, with highway funding groups — and the American Trucking Associations — saying while it was a positive the president mentioned infrastructure funding, he should have laid out more specific plans to help pay for needed repairs and projects.

“While it is critically important to the nation that Congress and the administration come together on a multiyear highway bill this year, we believe that until the administration puts forward a serious, user-based funding proposal we will risk going over the Highway Trust Fund ‘fiscal cliff’ in the near term and be woefully underfunded to meet the longer term needs of the nation,” said ATA President and CEO Bill Graves.

Similarly, ATA Chairman Phil Byrd — who attended the State of the Union address — said said “the president’s proposal was sorely lacking in details and comes up short of what the nation needs to maintain our economic competitiveness.” 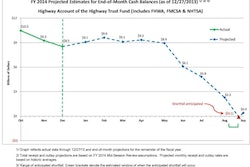