Art Huntley is a loser and he’s proud of it.

Growing up in the self-described “hood,” Art is no stranger to adversity. Homeless at the age of 19, his story is a journey of commitment and courage that he holds to this day. With the help of a few key people in his life, he’s on his way to becoming a natural bodybuilder, and I believe he’s going to make it. So does he, and that’s what makes him stand out in the crowd.

Art was athletic in school, had a nice physique, and no problem catching the eye of a lady. Time passed, he began trucking, and at the age of 28 he ended up at 300 pounds. He was plagued with headaches induced by high blood pressure and pain in his legs from poor circulation. He was lonely and depressed. During a visit with his surrogate Mom, Teresa Ogle, she expressed her concern for his poor health and deteriorating condition. She inspired him by giving him a red t-shirt that was much smaller than the shirt he was wearing, and told him she wanted to see him fit into the smaller shirt. Art accepted the challenge.

He enlisted the help of Marco, his trainer, and got on a regimen of a high-protein, low-carbohydrate diet and daily exercise. He started taking all-natural supplements, and committed himself to becoming what he wanted to be. Art has developed a routine he can do on the road, using everyday things found at truck stops, as well as his set of “big boy” weights he carries in his sleeper.

There are a lot people out here fighting a battle with their weight. Everyone knows it’s difficult to eat well unless you’re able to cook in the truck, and no one feels like exercising after fighting 80,000 pounds all day (or night). The common thread in Art’s message is “no excuses.” He’s put himself out there as inspiration to those fighting the same battle he is via his website. Art is just a regular guy, trying to make a living like the rest of us. His workout videos aren’t done professionally — he falls down and screws up on-camera, but he does it because he wants people to know he’s not making any excuses. The most important message he promotes is “You can, I can, we can.”

He’s 40 pounds lighter and well on his way to becoming a bodybuilder. He completed his first milestone by fitting into the t-shirt Teresa gave him, and he’s not nearly as lonely as he used to be. He no longer requires medication for his high blood pressure, and doesn’t suffer from pain induced by poor circulation.

Everyone out here has a story. Everyone fights a daily battle of some sort. Art wants people to know they’re not alone in their journey, and he’s willing to show that he’s not perfect. I have no doubt we’ll see Art on the bodybuilding circuit one day, because he believes in himself, which is the most important element to any kind of success.

Good luck, Art. And thanks for sharing.

Find one of Art’s workout vids below. For more, visit his website. 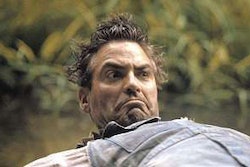 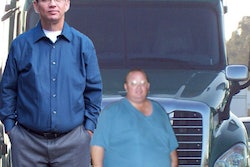