While a bevy of concerns familiar and not-so-familiar were debated, Bill Varga of the FMCSA’s Office of Chief Counsel threw something of a splash of cold water on the entirety of the proceedings. Given what’s been happening in the Congress, it’s still an open question of whether a full multi-year reauthorization will actually happen come later this year, when the two-year MAP-21 bill runs out. “I have no idea whether Congress will pass a reauthorization this year,” Varga said. “The chances are probably not great…, but as an agency we’re going to start down that path. We have to be ready if they are.”

MCSAC members overnight will personally prioritize a list of 30 recommendations that will then be deliberate in full committee the morning of February 11 to create a prioritized list to send to FMCSA.

Owner-Operator Independent Drivers Association Executive Vice President Todd Spencer came out hard for a review of current regulations and their safety-critical nature — specifically how the regulations’ violation correlates to actual crashes among motor carriers. “The reality is many of them aren’t [safety-sensitive],” Spencer said. “They’re things that just get written up. … Where we are with CSA is that it is a really questionable tool for promoting safety, simply because it measures so many things without a clear connection to safety.”

Henry Jasny of Advocates for Highway and Auto Safety disputed the notion that what might seem to be only minor violations had a correlation to a motor carrier’s safety, citing a kind of slippery-slope phenomenon. Carriers with a tendency to overlook minor maintenance items and incur minor violations could reasonably be expected to be a future safety risk, Jasny said, then citing research in general crime that showed such to be the case with petty incidents.

In the real world, noted Gary Catapano, bus fleet First Student’s safety senior vice president, the way the violations can pile up in particular BASICs has customers making erroneous conclusions about the safety of the carrier. The Driver Fitness CSA BASIC, in which the correlation to crashes is inverse (more violations = fewer crashes), Catapano singled out as particularly egregious. “People in the business community are misusing these,” he said. He cited 21 not-carry-the-medical card violation out of 1,500 inspections resulting in a BASIC ranking above the intervention threshold in Driver Fitness. “Now I’ve got someone saying they’re not going to do business with me because of the least important of these categories.”

Of other interest was several MCSAC members’ support for reforming the Fair Labor Standards Act’s exemption for interstate drivers from overtime pay as well as court decisions that have made minimum-wage protections virtually nonexistent for OTR haulers. Bruce Hamilton of the Amalgamated Transit Union put forward a recommendation that the overtime exemption be repealed, while establishment of a minimum “safe rate,” he said, for driver pay be implemented industry-wide. “Law should require the agency to put forward a minimum safe rate to be applied to commercial drivers and require that rate be paid.” Along with overtime-pay requirements, that would “get rid of the incentive that employers have to get their drivers to work more hours than they really should.”

Texas-based Clark Freight Lines’ Danny Schnautz agreed with the notion. “I’m for that,” he said, “and I don’t think that it will prevent employers asking them to work more hours. I think it will make employers optimize drivers’ time.”

The ongoing and widespread issue of  detention took front and center throughout the day as well. Schnautz offered recommendations to revamp the hours of service to get away from a one-size-fits-all approach, which could impact detention, but also he hammered away on the need for shippers and receivers to come under federal safety-regulatory purview, putting forward ideas to impose a requirement that drivers/carriers be paid for time detained.

“That whole concept should be expanded to require that the whole chain of responsibility is on the hook financially and in every other way for doing anything to encourage dangerous behavior,” said Road Safe America’s Stephen Owings, current MCSAC chairman.

Drop us a comment: What would you recommend FMCSA focus on in the next highway reauthorization?

Other topics part of MCSAC’s list are noted below.

Expediting response time to OSHA whistleblower protections
Lamont Byrd of the Teamsters: “When drivers elect to blow the whistle” under the protections against retaliation in the Surface Transportation Assistance Act, “their cases [should] be expedited. One of the situations we’ve encountered is that it can take a year or more for the case to be processed through the whistleblower process. There’s got to be a way to expedite it.”

Buttressing the DOT’s truck-safety response line
Todd Spencer: “It was set up [years ago] but was never adequately funded — this would be a priority tool for audits or enforcement actions. None of that stuff ever happened. They gave it to a contractor that was just an answering service. The advocates didn’t refer drivers to it any longer. We could build on that and we should build on that.”

FMCSA’s Larry Minor reported a mere 90 cases of calls into the hotline over the fiscal-year 2009-12 time period.

Hair drug testing, national employer notification program
American Trucking Associations’ Rob Abbott put forward a request that FMCSA allow hair testing to replace carriers’ urinalysis requirement in the testing of drivers. Likewise, Abbott said the ATA favors a national system of notification of driver licensure actions — suspensions, revocations — in any state. “There’s currently a difficulty where motor carriers might evaluate a driver in his/her state and might not know of a revocation in another state,” a suspension for lack of child-support payment or other problem. “We want to prevent those instances. So give employers the tools to identify those drivers whose privileges are suspended outside of their state of domicile.”

OOIDA’s Spencer: “Would you object to drivers having that information about themselves?” Oftentimes, Spencer noted, they don’t know such an action has taken place.

Ultimately, draft recommendations included that the information be available at no cost to both drivers and motor carriers.

Traffic enforcement on four-wheelers
Scott Hernandez of the Colorado State Patrol: “Increase the funding cap on traffic enforcement activity from 5 percent to 10 percent.” Enforcing traffic around trucks, in the current system, is limited for officers operating under a Motor Carrier Safety Assistance Program (MCSAP) grant. With more funding flexibility for the activity, Hernandez added, “motor carrier safety officers can stop cars driving recklessly around trucks — that would allow in an increase in the amount of dollars that could go to those activities.”

Other recommendations of interest to drivers were potentially requiring a rulemaking relative to sleep apnea, reinforcement of the burden of new technology mandates on small business, harmonization of intrastate and interstate regulations, size and weight issues and autorization of the FMCSA to develop tougher entry standards for new carriers. 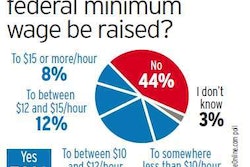