California’s Air Resources Board this week officially unveiled some proposed changes to its Truck & Bus Rule emissions regulations, which required truck owners with pre-2007 model trucks to either update their equipment or install particulate matter filters by Jan. 1.

The proposals build on the state’s “good faith” extensions for owner-operators and small fleets and the CARB meetings held in October, where officials heard public comment on flexibility options for compliance, said Beth White, manager at CARB.

White says the proposed changes include:

CARB is accepting public comment on the proposals until 5 p.m. (Pacific Time) April 24, and then the board will meet the same day to discuss the changes and consider public comments before either voting to approve them or making changes and then having another 15-day comment period.

Click here to visit the CARB page where public comment can be submitted. Comments can also be submitted via mail to: Clerk of the Board, Air Resources Board, 1001 I Street, Sacramento, California 95814.

To take advantage of the good faith efforts extension, truck owners can use the CARB TRUCRS system. 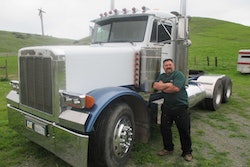 Checking in with ‘Truckers against CARB’ — rally, public meeting Thursday