Contrary to reports from earlier this year, the U.S. Department of State says Canacar has not filed for arbitration since the Mexican trucking trade association served notice in 2009, but officials did not provide further information.

The state department, which represents the United States in North American Free Trade Agreement arbitrations, verified it had not received a Notice of Arbitration since the association filed in 2009.

However, it would not say if action has occurred on that notice since it was filed or verify if the DOS is or anticipates negotiating with Canacar to avoid arbitration. “Since we do not comment on whether we are or are not engaged in non-public negotiations, we will not have anything further to share on it,” a DOS official said.

Canacar did not respond to a request for comment.

The association’s 2009 notice sought $6 billion in compensation because it alleged member companies lost money because NAFTA was not upheld. At that time, the state department said it “intends to defend this claim vigorously,” but has not made additional comment.

In October, the Federal Motor Carrier Safety Administration will conclude its cross-border pilot program with Mexico. Agency officials have admitted 13 carriers and are pending decision on four companies. They also have dismissed applications from 14 carriers while four others have withdrawn applications.

As of March 30, participants had undergone 4,695 inspections, more than the 4,100 inspections the FMCSA had said were necessary of produce valid data during the three-year pilot.

Still, a January congressional report says having only two carriers generating the majority of inspections raises the question of whether the data is a representative sample. The FMCSA does not consider crashes a statistically valid means of evaluating program safety because it is a relatively rare occurrence, the report stated.

Participants have been involved in seven crashes since the program began October 2011. Two of the accidents involved injuries and all required a vehicle be towed from the scene. FMCSA data does not indicate responsibility for these crashes, according to the report.

During the agency’s previous cross-border program with Mexico 2007-2009,  10 U.S. carriers participated in Mexico’s reciprocal pilot program. As of April 2011, four of these carriers operated in Mexico, but the FMCSA had not provided more recent information, the researchers stated.

Several reasons account for most Mexican program participants limiting travel to border states. According to the report, trucking is comparatively costly for long-distance shipments, even under Mexican wages, in contrast with ocean or rail shipping.

The researchers said another issue discouraging program participation is Mexican carriers have difficulty arranging backhauls. Additionally, border wait times are lengthy and unpredictable, so participating carriers often pad extra time when dispatching drivers. But if processing is faster than expected at the border, then drivers cannot be assigned other loads quickly. 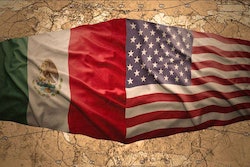