We are decidedly a Freightliner family. This probably distresses Freightliner exceedingly, but we’ve come to love the product and, I think, unless someone offered us a free truck of a different brand, we’ll probably stick with Freightliner. Before we ever owned a Freightliner, we had a Mercedes as our personal car, and before we ever knew the connection between the two, we had already decided the Mercedes was the best car (mechanically) we’d ever owned. It costs a million dollars when anything breaks, but fortunately, things don’t break often, so it’s been a great little car. I have abused it fully, and we bought it knowing it had been wrecked — the only way the Parkers can afford to buy a Mercedes — but it still starts for me every single time.

(Side note: a million dollars is obviously a filthy lie, but $1,800 seems to be the number the Mercedes mechanic is fond of. Apparently, it costs $1,800 to do just about anything to a Mercedes, including an oil change. I had to sell a kidney to pay for an ECM a couple years ago. OK, that’s a filthy lie too. Papa Dirt loaned us the money, but it was stressful and I think I might have at least gotten a rash from it.)

Now that all the love has been expressed for Freightliner and Mercedes, it bears to be mentioned that both vehicles have gremlins that are completely unique to their brand. I know this, because I looked it up on the interwebs, and we all know everything on the interwebs is true fact.

George was driven to the interwebs by the Mercedes, because it has a little red light and “beep beep” indicator that sounds and flashes to let you know your retractable roof isn’t secure. When I first got the car, the alarm would sound randomly, like when I was traveling at high rates of speed down the highway, and scare me so bad I’d careen over to the side and check my top, to make sure it was secure. I thought it might be residual damage from the wreck, so George got online and tried to look up a way to disable it. He found the support thread, headlined “OH MY GOD MAKE IT STOP,” with one search.

There is a gremlin in the SLK model and the gremlin makes your riding pleasure dry up immediately with a red flashing light and a “beep beep” that is so annoying it will make you scream obscenities at babies. One guy posted how he had spent $40K on a car his wife refused to drive, because of the beeping. And if you disable it, the ECM starts to act up and the whole engine runs bad. It’s an insidious plot by the gremlins to ruin my life. Anyway, I’ve gotten around it by riding with the top down as much as possible. It still alerts occasionally, but I know the top is secure and in the trunk when it beeps, so I laugh maniacally and crank the stereo up to 11 and continue to drive. Screw you, gremlins, I will enjoy my Mercedes.

That being said, Freightliner trucks have a gremlin in the cruise control. We’re for sure the Cascadia and Coronado have it, at least ours did — and in the Coronado’s case, does. This gremlin picks and chooses the times it will allow the cruise to work. Seven times out of ten, you start the truck, get on the highway, get into rolling gear and it fires right up. Three of those times, it does not respond, at all, to anything other than shutting completely down and starting all over again, which is sometimes difficult on a busy highway. It’s also hard on the fuel efficiency.

I wait every morning to see if it’s going to be a good day or a bad day. Good days, George sets the cruise, lifts his foot off the pedal, and voila!, everything is candy and unicorns. Bad days, he gets us up to warp speed, reaches to the dash to set the cruise, and begins the dance to appease to gremlins. It starts with him stomping his clutch foot and waving his hand in front of the panel, while yelling.

“Uh oh. Is the cruise not working today?”

“You’re going to have to pull over and shut her down.”

“Wha? What the hell? I’m not going to show the truck my boobs. She’s a girl, that’s not going to help anything.”

“No, but it’ll make me feel better about having to find a spot on the highway this morning to shut down and start over.”

George Parker knows how to handle gremlins. Let me reiterate – screw you, gremlins, we will enjoy our Freightliner as well. 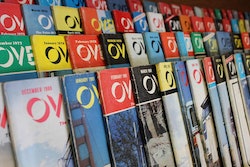 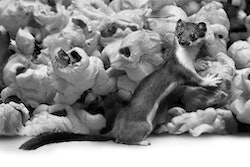 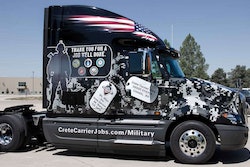 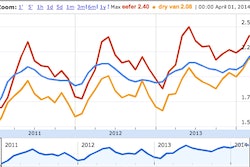