Even Superman had a Dad

It’s not often I see the strongest person I know cry. Actually, I’ve only seen him do it once, and that was when our son was born. I’ve heard him cry a couple of times since then, but I haven’t seen it. He’s private about his crying — seeing George cry is unusual, unlike me, who will cry in front of anyone. Seeing as how I cry every single time I hear the National Anthem, I’m liable to be blubbering about anything from a run-over kitten to the sunset. I run a continuous cycle of crying, laughing and screaming. I’m tons of fun at funerals and weddings.

“Grandpa’s got cancer. I was with him today when he got the call from the doctor.”

The boy was holding it together by a thread. His newly deep voice wavered, and he almost broke down, but I was proud of him. He delivered the news like a man. George looked like someone had punched him in the face.

He terminated the call before the boy could say anything else. I immediately went into “Nurse Wendy” mode. The word cancer doesn’t scare me like it should.

“Babe, just because he’s been diagnosed with cancer doesn’t mean he’s going to die. We don’t even know what kind of cancer it is. Let’s just wait and talk to him before we get all upset…”

I was talking to his back, he was getting out of the truck.

“I’m going to need to check the tires and stuff. Give me a few minutes, OK?”

He got out, I called the boy back and we did our respective crying together over the phone and straightened up before George got back in the truck. We were all red-eyed and freshly wiped and told each other good night. George put his headset back on and dialed his dad’s cell number. I listened to the beginning of his conversation before I went to the back to lay down, and I knew he was going to be OK.

“Hey old man. I guess I better hurry up and pay you all the money I owe you…”

**As it turns out, Ol’ Papa Dirt is going to be OK after all. His cancer is operable, and he’s going to be just fine, if they don’t kill him with all the tests to determine if he’s fine… 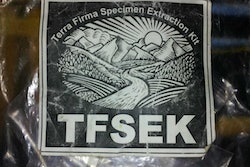 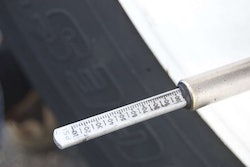 Dump the thump: Measuring tire pressure precisely is worth more than the time it takes