As part of the 25,000-engine recall issued last month Cummins and Cummins-Westport earlier this month, more than 2,000 2014-2015 Kenworth and Peterbilt model trucks have been recalled, along with more than 3,200 2008-2015 Freightliner, Sterling and Thomas Built model trucks and buses.

Cummins and Cummins-Westport said that in temperatures below freezing, ice could form in or near the intake manifold’s temperature and pressure sensor and cause it to not work properly, which could cause an increase in exhaust temperature and potential for flames to come out of the exhaust pipe, increasing risk of fire.

The Paccar and Daimler recalls are not all of the units affected in the recall, as Cummins and Cummins-Westport are recalling more than 25,000 engines total.

Paccar’s recall will begin by mid-April, the company says. Paccar customers may contact the company at 425-468-7400.

Click here to read more about the Cummins recall from previous OD coverage. 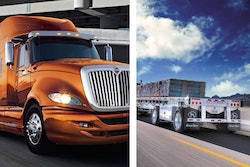