Trucking is still the U.S. primary mover of freight in the U.S. and moved nearly 70 percent of all domestic freight tonnage in the country in 2013, according to the American Trucking Associations’ American Trucking Trends report.

The share of tonnage carried by trucks grew from 2012′s 68.5 percent, the report says, and in spite of “congestion, regulations and crumbling infrastructure,” said ATA President and CEO Bill Graves.

ATA also produced the infographics below to depict the amount of freight trucking carries each year, but here are some other highlights from the report:

Here are the infographics: 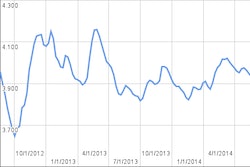