We’ve been eating healthier and exercising almost every day. Almost.

We partnered with our friends at The Weigh Station, who have designed a truck-specific work-out and diet that utilizes things we can actually buy at truck stops to eat, and equipment we already have on the truck to work out with. The core of their plan is simplicity and brevity. I like to call their workouts, “hey look, there’s a squirrel,” because they’re over and done with before I can hate them too much. There’s actually some fitness-y term they use for this type of workout, but I don’t think it’s called “annoying client.” The trainers do a great job being real about what we will and won’t do, and they know I’m a big whiny baby when it comes to exercise.

We did a great job the first week. Walked every day, started eating several small meals a day instead of one big one at the end of the day. We made better choices with what we were offered at the truck stops, which does mean a lot of Subway, unfortunately. But we both felt better and lost weight.

The second week we did much the same. Walked, did our exercises, ate a lot of little snacks instead of big meals…and then we got to South Carolina.

Get out of my way, I’m headed to the K&W Cafeteria! Holy grits and cheese on everything, can I get a witness?

We kept walking, maybe even over-compensating a little because we knew we weren’t eating like we should. It’s hot and swampy on the coast in South Carolina — it’s not hard to sweat out a decent meal that involves macaroni and cheese with ham chunks, is it?

Hyman’s Seafood in Charleston came into my life like a butter-covered angel and I was rendered unable to remain even close to a meal plan, in fact, unable to even utter the very words “fat free dressing.”

We kept walking, because I knew my body hated me for each and every hush puppy I ate. I’m not ashamed to admit to two helpings of boiled peanuts for an appetizer on the same night I ate a pound of crab legs drenched in butter. I paid with a salt water bloat that can only be described as epic the next day, small children pointed and cried when they saw me in the truck stop parking lot. It’s hard to walk on Stay Puff marshmallow feet, but I forged on and walked, through the ridicule of mean children and the pain of puffy feet. (Ladies and gentleman, I believe that background noise you hear is indeed the world’s tiniest violin.)

We didn’t walk that night and we haven’t walked since then, even though we’ve been home. Actually, being home makes it a little harder for me to adhere to a fitness schedule, which seems oddly backwards and is something I need to work on.

We head out again Tuesday, with the promise of possible fortunes over the horizon (I make myself lol sometimes), and a new determination to stick to our fitness program. I want to hit GATS fit and at a good fighting weight, just in case Anne Ferro challenges me to a mud wrestling match at Gilley’s. It could totally happen, and if it doesn’t, it never hurts to be ready for a zombie apocalypse. So win/win with being in shape. See you at GATS! 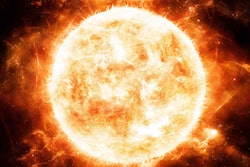 Heat so bad you can cut it with a knife 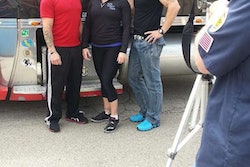 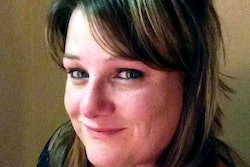