The Port of Los Angeles has reported no cargo traffic disruptions during the first day of an indefinite truckers strike over wages and working conditions at three area drayage companies.

The Teamsters charge the three carriers have violated labor laws and interfered with unionization efforts.

GFS and the union are scheduled for oral arguments Aug. 25 before the National Labor Relations Board. The Los Angeles NLRB office stated it vacated the carrier’s informal settlement with the union because the company violated it by illegally attempting to interfere with unionization efforts.

Green Fleet has said most of its company drivers do not support the union and owner-operators are a minority of the carrier’s truckers.  The board had disregarded the company’s evidence of the union’s “heavy-handed misconduct,” according to a June 20 GFS statement. 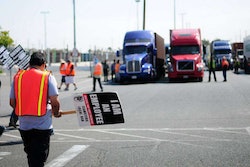