Truckers for a Cause sleep apnea support group cofounder and driver Bob Stanton was diagnosed with sleep apnea in 2002.

“I got a call from the sleep doctor’s office saying the test was positive,” he says. “Then I drove for three hours to meet up with my driver manager. I told him I would need to go back to the lab and set pressure” – there were no autotitrating continuous positive airway pressure (CPAP) machines in those days. “Having driven for three hours with a disqualifying condition, I was told ‘Load yourself on a bus – you don’t have a job anymore.’ ”

While Stanton wasn’t fired permanently, the story is an example of the “administrative malarkey” he says has led him to become a passionate advocate for drivers dealing with sleep apnea.

Drivers who feel they may have the condition may best be able to get it handled appropriately with a trusted, regular doctor outside of the U.S. Department of Transportation physical exam. “There are a lot of drivers that want to be tested and treated, and not because they are being told to,” Stanton says.

Get ahead of the medical certification process
“Treat your body just like a truck,” says Stanton. “Get a PM inspection done before you go for a DOT physical. Have them go over everything. I go for my annual physical a month before my DOT physical – have them print out documentation of everything I’ll need so I’ve got everything ready.”

Truckers for a Cause does free screenings at some truck shows. There’s a self-screening tool at its website that asks a few questions to gauge risk for the condition. Such questionnaire-based screening tools are most effective when used in a setting outside of the medical certification process, given that diagnostic questionnaires can be next to useless when jobs are on the line.

One advantage is that the doctor can’t tell anyone “if your blood pressure is too high” or if you have a sleep-apnea diagnosis. You have time to get treated before your medical certification deadline comes around. If a test is required as a condition of certification, however, you could find yourself sidelined until treatment is shown to be effective.

Greg McDermand of Phoenix Sleep Solutions says most of the examiners he works with understand the unsettled nature of a lot of the guidance. In most cases, they “would be generous enough to give them a 60- to 90-day extension while they get their stuff done” – testing and getting treatment in line if need be.

Your doctor likely will refer you to a sleep specialist if your risk factors suggest an apnea diagnosis. The specialist, if an evaluation points to apnea, will recommend an in-lab test or a portable home testing option. McDermand has seen success with take-home options, though Rosarion and Stanton prefer in-lab testing.

Because of the possible conflict of interest, Rosarion cautions operators to avoid examiners who use any in-house apnea-testing services.

Initial treatment
For those who truly have sleep apnea, successful treatment often results in greatly improved health over time – weight loss, better rest, improved blood pressure and the like. Cases where the condition ceases to require treatment have been documented.

Successful treatment, McDermand says, normally would require a report from a modern CPAP machine showing an apnea-hypopnea index (AHI) measurement below five, “in the normal range,” and/or evidence of usage of at least 70 percent, or four hours daily.

That’s “considered minimally acceptable use guidance,” says Stanton. The figure “came out of Medicare reimbursement guidance. If you’re prescribed a CPAP and you’re not using it at least that much, your insurance company likely won’t pay for it.”

Most good sleep doctors “like to see at least six if not seven hours,” Stanton says. The AHI measurement from contemporary machines is crucial, however, to know if treatment is truly effective. “When you get your download [from the CPAP machine’s SD card], don’t just look at how many hours, but was it doing any good?”

Dr. Randolph Rosarion, a medical examiner practicing in New York, says the particulars of the case determine whether a temporary certification is justified. “If I have a 300-pound guy who’s saying he’s very sleepy, and he’s driving long-haul and hasn’t been treated for sleep apnea, I wouldn’t give him” any kind of certification until he’s tested, he says.

Ongoing treatment, auditing
If the test comes back positive, certification thereafter typically will be for a single year. “Every year, they have to walk in with a compliance report” that shows evidence of CPAP usage, says McDermand. If treated surgically or via another method, sleep testing will be necessary to show effectiveness.

Rosarion suggests that ongoing consultation with a sleep specialist is the way that most of his apnea patients treat it. Using Stanton’s analogy, drivers would get their “sleep PM” before hitting the road to get their official medical certification

If you’re facing a sleep-apnea test, doctors say, says McDermand, contrary to popular myth on the condition, “not everybody’s positive” who’s tested. One in five of the “yes” respondents in the below charted polling data – following surveying of Overdrive readers in July — confirm McDermand’s contention, though such results also reinforce anecdotal evidence that doctors’ willingness to test is growing. Meanwhile, fewer than 10 percent of all “No” respondents indicated that a doctor had recommended apnea testing or treatment in the past. 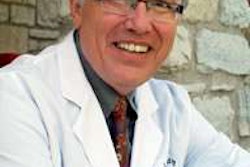 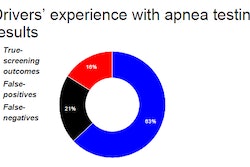