Help me Obi Wan, you’re my only hope

I made the mistake of leaving the doors open on the truck long enough to let a Ninja fly into the cab. This bastard took up residence like a professional squatter and refused to leave or be killed. I threw my elbow out trying to swat him away with the atlas, and I’ve since become obsessed with his eternal damnation.

I like to air the cab out when the weather is nice. It gets musty inside the box, especially when the truck travels consistently back and forth to Laredo, where it is always the surface temperature of the sun. I really love our beautiful black paint job, but I’m here to tell you underneath it is the hottest damn place on the planet when the air-conditioning is out and you’re 15 miles on the North side of Laredo. You roll the windows down and it’s like someone is holding a giant blow dryer in your face. Takes about four minutes for your eyeballs to become raisins. Truly miserable. (I have so much more respect for the people who did the job before air-ride seats and air-conditioning. Bless you.)

Anyway, I left the doors open and somehow attracted a not only fat, green, gross fly who sounded like one of those crazy yellow crop dusters that haunt I-40 buzzing around in the back, he also appeared to be fairly smart. These attributes, combined with a ninja-like quickness, made this pest a worthy and miserable adversary.

After the first night of having the beast land on my face and wake me up approximately 767 times, I vowed to kill it in a slow, painful way. I spent the next day watching for him, waiting patiently with my rolled-up Challenge magazine. He never once showed his buggy-eyed face, until we turned everything off to go to sleep.

While I briefly considered soaking the mattress with kerosene and setting the place on fire, George rolled over and got grumpy with me.

“Look, I can’t get any rest with you jumping up every time that fly lands on your face. You let it in here, you kill the damn thing or let it out, but I gotta sleep.”

“I would like to know what the hell you think I’m supposed to do? I’ve been trying to kill it for a day and a half now. I can’t ever find the damn thing when the lights are on.”

“I don’t care what you do — throw a raw piece of raw meat out the window and let the fly chase it. I’m going to sleep.”

He flopped over and left me wondering if he was already asleep and talking out of his head to me, or if he actually thought I had a piece of raw meat designated to use as fly bait somewhere in the truck. I got up and sat in the dark, waiting patiently for the buzzing to begin again.

The noise come from right behind my right ear, and in a move that I can only say was inspired by a Jedi Master, I slammed the electric window down and the sudden vacuum caused by the change in temperature sucked him into the wet, warm darkness that has been South Texas this year.

I went back to the bunk feeling pretty good about myself until the thought occurred to me that the same fly would probably fly right back in the door as soon as I opened it in the morning to get out and brush my teeth. This may seem like an obsessive worry, but if you’ve ever had a big, loud fly in the cab while you’re trying to sleep, you’ll understand. I know you will. You do, don’t you? I knew you would. 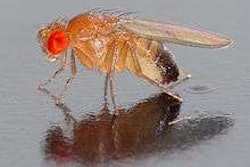