Owner-operators and the lobbying group that represents them say they fail to see the need for an increase to the minimum amount of liability insurance required of carriers and they’re afraid an increase would drive premium costs to a point that would force them to close shop.

The publicly aired concerns came from the more than 2,000 comments submitted in the 90-day public feedback window allowed on the Federal Motor Carrier Safety Administration’s solicitation for input from trucking industry stakeholders and the public at large on a potential rule to up the minimum about of liability insurance trucking companies must legally carry.

Motor carriers currently must hold $750,000 in liability insurance. But FMCSA said last April that number, set in the 1980s, hasn’t kept up with inflation and comes up short in covering modern crashes and medical expenses. The agency’s report was required by 2012’s MAP-21 highway funding law.

The trucking industry, however, mostly disagrees with FMCSA’s report, contending an insurance increase is not necessary, especially given the impact it could have on premiums.

The agency published Nov. 26, 2014, an Advanced Notice of Proposed Rulemaking announcing its exploration of increasing insurance minimums for carriers, following up on promises made in its April report.

The ANPRM listed 26 questions FMCSA sought input on from the trucking industry — aimed at carriers, brokers and others who would fall under the rule’s scope.

The comment period, however, also attracted a slew of public comments from lawyers, insurance industry stakeholders and members of the public who had been involved in or impacted by a truck-related crash in which the carrier’s liability insurance did not meet the needs of medical bills, out-of-work expenses or other financial holes.

Here’s a look at the comments:

Owner-Operator Independent Drivers Association: OOIDA in its comment reached back to the establishment of the current limits in the 1980s, saying the DOT agency then responsible for regulating the limit — the Federal Highway Administration — noted that the minimum should be “the lowest limits allowed,” so as to enable carriers to afford it.

OOIDA says regulators faced similar circumstances then as they do today: Trying to balance the needs of catastrophic crashes with those of nearly every other crash that occurs.

In short, OOIDA says, data available today does not show a need to increase the current minimums. “The potential disruption that increased insurance premiums could create for these sometimes conflicting interests was weighed carefully…when the original limits were set,” OOIDA writes.

The group, which represents owner-operators and small carriers, also questioned a potential insurance capacity problem and the ripple effect it would have on the trucking industry and potentially the U.S. economy as a whole.

An increase, OOIDA notes, could cause premiums to spike and competition to be limited.

American Trucking Associations: ATA has maintained in recent years that there is no need to increase the current $750,000 minimum, citing data that shows only one-tenth of 1 percent of crashes involving trucks have claims that exceed that minimum — points reiterated in its public comment on the ANPRM.

ATA also points to data from the agency’s own report (the Volpe Report) that shows more than 93 percent of policies on heavy trucks already exceed $1 million. Moreover, the Volpe Report showed “catastrophic accidents caused by the carrier are relatively rare,” ATA writes. “Further, crashes that exceed insurance limits are even more rare…estimated at between 30-100 per year.”

ATA also notes concerns in its comments about a potential capacity problem for a broad, nationwide insurance increase. “ATA has often heard there is a limited amount of insurance capacity, and that there are fewer insurance companies writing motor carrier policies than existed 10-15 years ago. Should the increase create a shortage, the cost impact for carriers, regardless of how safe, could be dramatic.”

Throughout its answers to FMCSA’s 26 questions, ATA attempts to tie the current debate over an insurance increase back to Congress’ intent in 1985, when it set the current minimum.

“When viewed through [that] lens,” ATA writes, “available data…strongly suggests the limits continue to meet their purpose.”

National Association of Small Trucking Companies: NASTC emphasized the reality that “new and small carriers are going to incur significantly more costs for insurance than established mega fleets” in explaining the dynamics in place in the insurance market. “It would be entirely inaccurate to conclude that there is an underwritten base level for primary or excess liability that applies to all carriers, large or small, regardless of where they are located,” which also comes into play in rates and coverage amounts.

NASTC also argued that insurers’ use of CSA Safety Measurement System data, “coupled with the Agency’s suggestion that its algorithms are fit for use by insurers,” has hardened the market for insurance as it relates to new and small carriers. Any increase in financial responsibility, NASTC added, “would affect small carriers far more than large carriers.”

Raising insurance minimums might furthermore encourage onerous “litigation and excess verdicts” across the spectrum of carriers. Any cost-benefit analysis the agency undertakes on insurance should take into account that “any increased compensation” to those injured in catastrophic accidents “could result in compensation for non-compensatory damages,” higher attorney’s fees, and etc.

Commenter Christopher Celsur: Celsur writes in his comment an increase in liability minimums would affect smaller carriers like owner-operators more harshly than the rest of the industry. “First let’s focus on who is pushing for higher insurance minimums. The trial lawyers, who are concerned about the almighty dollar and not safety. Large carriers, who are self-insured and could [not] care less about the increase, but see the benefit of the extra burden on smaller carriers and independents who would not survive the increase. This increase would cause many to close down and greatly burden others.”

Owner-operator Rick Knight: Commenter Rick Knight aired similar concerns. “Increasing our liability to $4+ million would either put me out of business or raise the freight costs across the country. Our company currently carries $1 million in liability which would cover 99 percent of any accident liability. My driving record and all newly hired drivers are scrutinized and evaluated at the current level to eliminate untrained, unsafe drivers. Small trucking companies are the backbone of the trucking industry. Raising liability rates may decrease safety overall, as more money going to insurance leaves less for repairs, updates and equipment. Please consider the impact this may have on all aspects of the trucking industry and help us stay in business.”

Trucking Alliance/Knight Transportation: The Trucking Alliance (fully, the Alliance for Driver Safety & Security) favors an increase. Led by carrier members like Knight Transportation, J.B. Hunt, Maverick USA and others, the Alliance contends the increase issue should center on the total dollars spent on crash settlements rather than the number of settlements that exceed the minimum.

“If all crash settlements represented in the database were covered by a $750,000 insured limit of liability, then 42 percent of the monetary exposure from these crashes would represent an uninsured liability of the trucking company,” the group writes.

It too argues Congressional intent relative to lawmakers’ action on liability insurance in the 1980s: “Is the current level sufficient to cover the medical and related costs of the public who are injured in trucking accidents? The simple answer is ‘no’ it isn’t,” the Alliance says in its comment. “We believe that by applying any recognized actuarial measurement of risk, the minimum financial responsibility of motor carriers should be increased above the current $750,000 level. To oppose an increase is to ignore simple logic.”

Their concerns seem to echo other comments made by personal injury lawyers during the comment period.

Another personal injury lawyer in Ohio, Jeff Friedman, also wrote in support of the increase. “I have handled many accidents involving trucks vs. cars. Many of my clients were killed as a result of these collisions, and many more suffered life-altering injuries. Relying on my firsthand experience, I am compelled to offer commentary on the Federal Motor Carrier Safety Administration’s Advanced Notice of Proposed Rulemaking concerning increasing minimum level of financial responsibility for motor carriers.”

Thousands of other comments were made on the agency’s ANPRM, with owner-operators, truck drivers, small carriers, large carriers, members of the motoring public, attorneys and more chiming in. 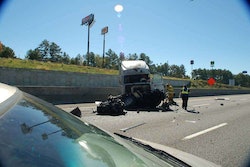 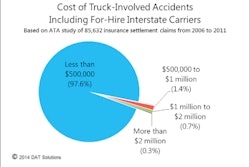