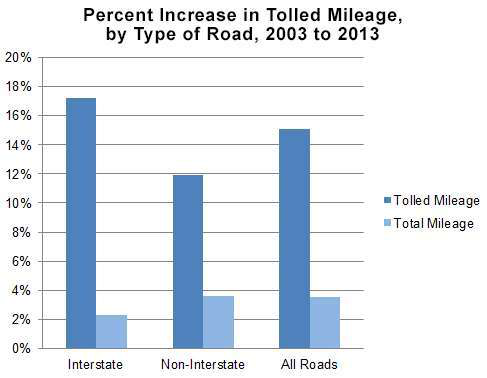 The number of road miles in the U.S. that are tolled grew by 15.1 percent from 2003 to 2013, according to a study released this week by the Brookings Institute, who called the uptick a “seldom mentioned…increased proliferation of tolls” throughout the country’s road network.

By 2013, nearly 5,400 miles across Interstate and non-Interstate roads in the U.S. were tolled, the study says. While that’s a 15.1 percent increase from 2003, total system mileage grew by just 3.6 percent in the same time span, Brookings said.

Brookings points to federal lawmakers’ reluctance to and recent inability to pass a long-term highway funding bill as reason for the jump in tolled mileage.

“Amidst federal dysfunction, every financing option appears to be on the table to repair the country’s infrastructure, and tolls are likely to be one of many possibilities attracting attention in the months to come,” Brookings wrote in its research brief.

Researchers also said the trend could be poised to continue, as many states have initiatives in the works to make tolls a “viable highway funding option,” Brookings says, following the trends set by other states who already have tolling expansion plans underway.

House bill would up fuel taxes to pay for highways, tie rate to inflation