We made it home from our fourth Great American Trucking Show like we usually do – tired, beat-up and slightly hungover, but with yet another set of excellent stories and experiences, had with some of the finest people in the industry. It really is a treat, and we appreciate Randall-Reilly for doing a great job throwing the party.

We flew into this show, because it’s (supposed to be) easier, and George is on a committed schedule that would get all jacked up if he threw a Dallas load into the middle of it.

Can I just take a moment say that I despise flying?

What used to be a semi-pleasurable experience has turned into a nightmare of being herded like giant germ donkeys into child-sized car seats, three deep on both sides of a foot-wide aisle littered with stray gummi bears, crumbs and tissue remnants. You’re strapped in, shot off into the stratosphere, and apparently something happens in the Matrix to make a 99-cent can of Pringles suddenly cost $9. You’re almost forced to eat the stray gummi bears.

Sometimes, if you’re lucky, as soon as the door shuts, someone sitting close to you (this is hilarious, because the entire plane is close to you when people are sitting four centimeters apart) decides to eat the smelliest possible food known to mankind. Usually, it’s something they brought from home that involves fish, garlic and the scent glands of rabid ferrets, and being trapped in it from the very minute your flight begins, until you exit the plane, will deter you from ever wanting to eat again, much less be hungry on the flight. The downside is having to hug friends and family who might pick you up at the airport, reeking of rabid ferret scent glands.

I remember when I was much younger, my grandmother and I would fly Delta out of Atlanta to visit my mom in Dayton, and it was a classy experience. The flight attendants were really nice and peanuts were free. If there were seats available, they didn’t bat an eye to give me an upgrade when I was traveling with a little kid, to make sure everyone was comfortable. It was nice, I felt like I got my money’s worth.

I’m not sure what they’ve done to airline seats since the late 80s, but I can assure you, if you’re larger than a premature human infant, you’re going to be uncomfortable in one. Poor George has a helluva time folding his six-foot-two legs into the generous three-and-a-half-inch space they provide you for your knees these days. Apparently, the engineers arranging this stuff are basing their models off Civil War Soldiers amputees, and not the average size of bipedal grown men in the year 2015.

(Side note and fun fact — Union Army records reveal that the average Union soldier during the American Civil War was 5’8″ and a quarter-inch and weighed 143.5 pounds, and while the average American male of 2015 is only an inch and a half taller, their body weight has increased by 40 pounds. A human leg for a 150-lb. person weighs roughly 26 lbs., and now I have “how much does a severed human leg weigh?” in my Google history. You’re welcome for the useless and somewhat disturbing information.)

I made the terrible mistake of taking my shoes off on the flight home. My feet were absolutely killing me – the pedometer on my phone read a little less than 28 miles walked for the three days at GATS, and I helped our buddy Ashley at Diesel Life load her booth on Saturday evening, so needless to say, my old dogs were barking.

I slipped off my tennies and failed to realize I’d have to eventually lean forward to re-tie them. I think I may have a cervical compression fracture from the yoga I had to perform, without disturbing my very thankfully tiny and quiet seatmate on one side, and George, wedged straight up in his seat, snoring loud enough to make babies cry on the other, to get my shoes back on my swole-up old-lady feet. I was sore, beat-up, hungover and immediately decided that flying is, both literally and figuratively, for the damn birds.

We spent some time with our friend, Will Chu, of LoadDocs. He and his team rented a condo through Airbnb that was right in the middle of Dallas with a fantastic upper deck patio and a city view, and they were kind enough to throw a beautiful barbecue on it for us and the Shaughnessys from Truckitsmart.com.

I’d heard of Airbnb, but we’ve never used it. This place was really neat, and it was actually less weird than it seems to be in a stranger’s house. My imagination runs and I can see that going bad in about a million ways involving people never being heard from again because they’re locked in someone’s basement, putting the lotion on the skin. But this was very nice, and it’s something I might consider trying one day, as long as I can bring a taser and possibly an 8-inch buck knife. I’ll settle for one or the other.

We also used Uber for the first time, as did our friend, Joey “The Juice” Slaughter from Freightliner’s Team Run Smart. He mentioned having a good experience, while ours was a little hairy. I’m going to say a car full of professional drivers is a tough audience, but our driver wasn’t real keen on direction. It was really no better or worse than a cab. Again, a super-neat idea, and something I may consider trying again – especially if we’re somewhere cabs are unavailable.

By and far, I travel most comfortably in Precious, and passenger trucking has spoiled me. It’s nice as hell to have someone drive you all over the place, a bunk to go hide in when traffic gets scary, a fridge to store snacks in that are reasonably priced, and the ability to be able to run your computer and Wifi without having to give someone your credit card number. Also, naps in the supine position with all appendages fully extended. Need I say more?

I think I just hit on a gabillion dollar idea here – we’ll combine Uber and Airbnb and let the general public hire out drivers to haul them from place to place in big trucks. The EPA will love it and the unaffiliated will get their very own up-close and personal experience with how many times a day you nearly crap your pants because a private vehicle does something stupid and dangerous beside, in front, or in the general vicinity of, an 80,000-lb. rig.

It’s brilliant, except for the potential serial killer part. We’ll have to figure a way to get around all that. I’ll get back to you. Meanwhile, back to our scheduled programming Tuesday morning. Let’s go truckin’. 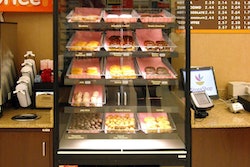 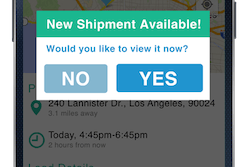