“The old year exited and the new year entered on a pretty good note across the board,” notes DAT’s Ken Harper attendant to this spot market update, for the holiday week last week. While load-to-truck ratios were way up with many operators shut down for the week, Harper nonetheless was inclined to see it all as a “sign that 2016 is going to be good to commercial trucking fleets and owner-operators.” 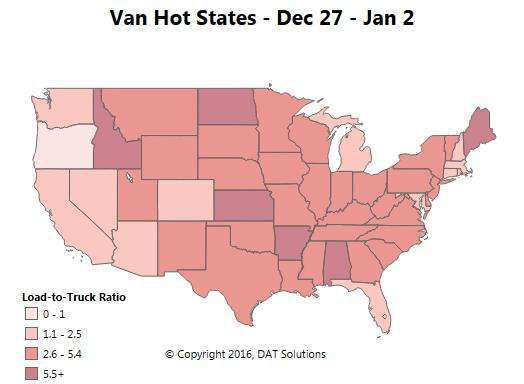 The dry van load-to-truck ratio surged from 1.9 to 3.4 loads per truck on the spot market last week, as year-end demand and ongoing bad weather faced off against a relative shortage of trucks between two holidays. Van rates held steady at a national average of $1.71 per mile, with head-haul rate increases offset by declines in back hauls. Last week’s Hot States Map shows a quiet West Coast and truck shortages in a handful of states. This week, the Hot Markets include Minneapolis, Minn.; Green Bay, Wis.; Lubbock and Laredo, Texas; Hutchinson, Kan.; and Pittsburgh and Philadelphia, Pa. Those cities offer exceptional load volume, coupled with high load-to-truck ratios. 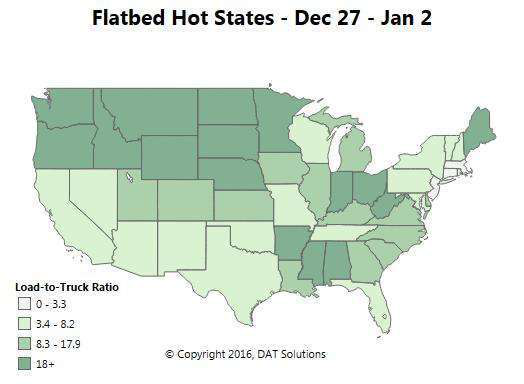 The national average rate rose 1 cent for flatbeds last week, to $1.92 per mile, despite a cent’s worth fo a decline in the fuel surcharge. The load-to-truck ratio got a big boost, from 7.5 to 11.4 loads per truck, mostly because truckers were more likely than freight brokers to take vacation during the week between Christmas and New Year’s. Outbound rates increased for flatbed loads originating in Las Vegas, Rock Island, Houston, Oklahoma City, Atlanta, and Pittsburgh, but rates declined in Los Angeles, Dallas, Tampa, and Baltimore. (Rates for individual lanes are available in DAT TruckersEdge Enhanced and other of its load boards.) 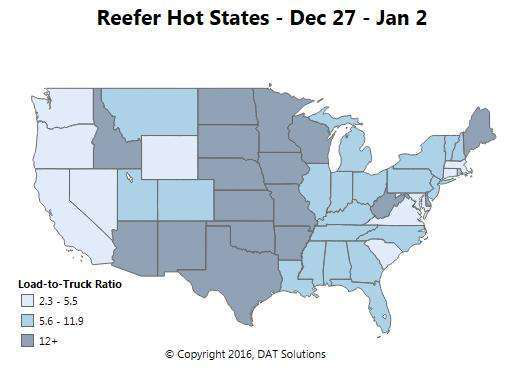 Reefer rates rose 2 cents per mile last week to $1.95, as the load-to-truck ratio nearly doubled, soaring from 5.2 to 9.6 loads per truck. Outbound rates increased for reefer loads originating in Los Angeles, Green Bay, Dallas, and Philadelphia, but rates declined in Twin Falls, Atlanta, and Elizabeth, N.J. Rates were affected by weather as well as year-end demand.
Get the business tips, industry insights and trending news every owner-operator needs to know in the Overdrive newsletter.
Read Next 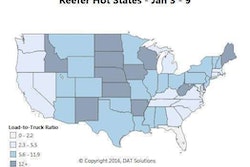