T.F. Scott Darling is awaiting confirmation by the Senate to be the next head of the Federal Motor Carrier Safety Administration.

Nearly six months after being nominated by President Barack Obama to head the DOT’s Federal Motor Carrier Safety Administration on a permanent basis, T.F. Scott Darling will face his first confirmation hearing next week, according to a press release from the Senate’s commerce committee.

Darling is scheduled to appear before the committee Wednesday, Jan. 20.

After the hearing, Darling must still be confirmed by the full Senate to become the next administrator of the federal trucking regulatory agency.

Darling has headed FMCSA since August 2014, following the sudden resignation of then-Administrator Anne Ferro. He was referred to as the acting administrator for seven months, though the title was removed due to federal law last March. He’s since continued to lead the agency, however, despite the title change.

Obama nominated Darling to be the agency’s administrator on Aug. 5. Due to long Congressional recesses and attendance to other work, however, the Senate has not yet taken any action on the nomination. 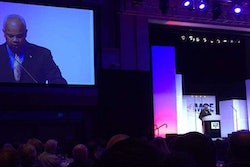