January 1, 2020 — Today, the Federal Motor Carrier Safety Administration proudly rolls out its new and improved version of trucking law. As of this date, it is now illegal for any commercial driver to be autonomous in any way, shape or form. All commercial vehicles will be limited at 62 mph, will have inward-facing, outward facing, and bunk cameras, and they’ve taken the electronic logs to a higher level by enforcing implantation of brain probes in all commercial drivers. These probes are to be connected to the starting mechanisms of the truck, and if they’re not properly connected, the driver is sent immediately to re-organization camps, where they’re taught to follow the rules by whatever means necessary.

Captain Crudlip the Ridiculous, director for the organization, explain further that “under our new guidelines and mandates, it will be virtually impossible for the driver to make decisions regarding the actual operation of the truck without proper clearance from the officials in Washington.”

When asked about the possibility of this being difficult to implement in “real world” time, he replied, “What’s that?”

Further restrictions now in place include a “one doughnut a week” mandate, in which all CDL holders will be issued “good boy” credits they can trade for snacks that aren’t offered on the gubmint approved driver menus.

Captain Crudlip elaborates, “With the obesity epidemic, we can’t have these folks out here eating just anything. We offer them a steady diet of Subway sandwiches and boiled eggs — what more could they possibly want?”

Unfortunately, driver training mandates have fallen by the wayside. Efforts by actual drivers, way back in 2015, to enhance and upgrade the education standards of potential drivers, have been eradicated.

Crudlip has this to say, “How are we going to fine people and make money to pay for my monthly vacation if they know what they’re doing?”

As can be expected, commercial drivers are none too pleased about the future of trucking. Harvey Highwayman, a Raging Turd Express driver, sums it up like this, “I wasn’t mad until they took away my doughnuts.” 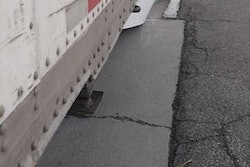 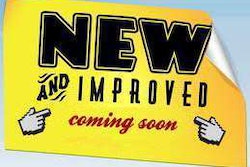 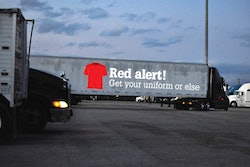 Red alert: Get your uniform or else!